Legend Of the Banshee 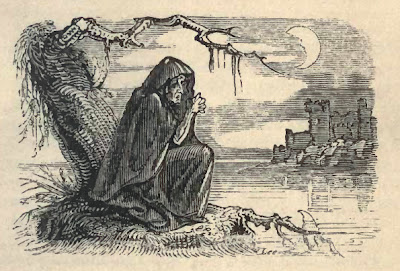 Late at night you hear an unearthly wail. It sounds like a cross between a wolf in pain, an owl, a strong wind, a heartbroken woman, a woman in labor, wild geese, and an abandoned child. It is the mournful cry of the Banshee.

Sidhe is also used as a name for fairy. The fairies are said to have come from the Tuatha Da Danann.

Bean is pronounced as Ban. It means woman. So a Banshee is a woman fairy. But she is not just any fairy. She has a specific function. She announces the death of a family member and mourns the death.

There is another fairy that is usually associated with Scotland called the bean-nighe. or bean-sith. Her name means washer woman. She is found washing bloody clothes, armor, and even body parts belonging to the soon-to-be deceased.

Because people are born of woman, the Irish believe that it is only fitting that a woman accompany them to their place in the afterlife. As seen by the name a banshee is always female.

It is thought that the banshee might have originally been a member of the family she cries for. She will have only one family and she is extremely loyal to that family. She has even followed them when they emigrated to other parts of the world.

The banshee might have been a member of the family who died in childbirth. Because of her sorrow she wanders the Earth in constant mourning.

It is also considered that she was once a woman who was paid to mourn at the funeral of an important person. She would caoineadh (keen) long and loud to usher the deceased out of this world. These keeners often bonded with the family and stayed on with them after death.

The eyes of the banshee are deep red. It is from the constant crying and mourning of the dead.

Originally the banshee only wailed for a family of the six families who were considered to be the most prominent Irish clans. Down through the years there has been a lot of intermarrying among the families so you might hear her even if you aren't sure of the family she mourns.

The appearance of the banshee varies depending on the telling. She might be young and lovely, mature and handsome, or old and haggish. Those three descriptions coincide with the three aspects of Mother Nature.

She is dressed in the costume of a young peasant girl of ancient times. There may be a bit of color in her clothing. She may be dressed in white or off white, similar to a shroud. Or she might be dressed in black or gray. Often she has a green dress with a black cape over it.

Her hair is most interesting. The color may be gray, white, black, or red. It is very long and floats around her as if she were floating in water. Apparently it is her one vanity.

A Banshee can often be seen combing her hair with a silver comb. If you see a comb when you are out do not pick it up, especially if it is silver. That will give the banshee the right to whisk you away then and there.

Remember the cry of the banshee is meant to alert the family to an impending death. She does not kill them. She simply waits for the person to die. She mourns before and after the death. Often she will mix in with the mourners at the funeral. Then she escorts the person to the proper place in the afterlife. If more than one banshee howls a person of great impotance has died.

She is accompanied by a coach-a-bower (coiste-bodhar). It is a huge black coach with a coffin on top. It is drawn by headless horses and driven by a Dullahan (headless rider).

Hve you heard the cry of the banshee? What a tale that would be..