Florida Is Being Slimed! 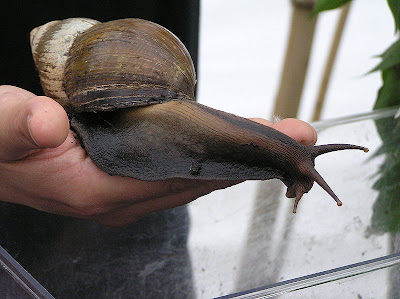 Maybe they came by accident... like eggs on an orange peel that hatched later. Maybe somebody thought they were unusual and easy to catch so they thought they'd be a good pet. They may be used in some religious ceremonies. However it happened, Florida is being overrun by Giant African Land Snails.

In Miami-Dade they catch about 1,000 of these snails every week. Since they were first discovered in 2011 they have found approximately 117,000 Giant African land snails.

In 1966 they got a serious infestation when a little boy brought some home in his pocket to be pets. His grandmother found them and released them in her garden. In seven years there were more than 17,000 of them. It cost more than a million dollars and ten years to get rid of them then.

As you can see in the picture Giant African land snails are in fact giant. They can grow to be the size of rats. They are cute guys. They seem like they are looking at you and trying to communicate. That makes them all the more appealing to us.

The problems they cause are not so appealing. They eat more than 500 different kinds of plants. That means pretty much anything in their paths in Southern Florida. Their shells are so strong that if you run over one with your car it can give you a flat tire. If they are in the grass while you are mowing your lawn the shells become projectiles when they are hit by the blades of the mower.  Not to mention the damage to the blades.

A lot of houses in Florida are made of stucco. These huge snails eat stucco because it contains calcium. Calcium is necessary for keeping a strong shell. And the snails are so big they are causing a lot of damage to houses.Their slime and excrement leave a slimy mess wherever they go.

On top of all that the Giant African land snails carry a parasitic rat lungworm that can infect humans. Illness, including a form of meningitis, is transmitted by these worms.

There seem to be no natural enemies of this species of snail here. That often happens when a new species is introduced to a country.

So now authorities are trying to figure out the best way to get rid of these pests. Bait to lure them into captivity so they can be taken out of Florida is one suggestion.