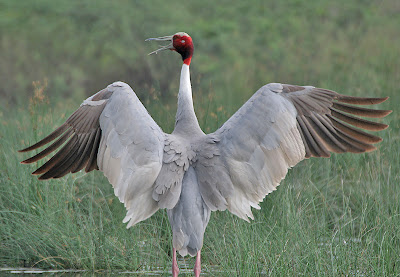 When I was a child we watched Mutual of Omaha's Wild Kingdom every Sunday. It was a program about life in the wild and hosted by Marlin Perkins.

What we would see on Sundays was how the animal of that day behaved in its natural habitat. We would see where the animal lived and what conditions it needed to successfully survive. We could watch how the animal interacted with others like themselves. Mating rituals were almost always included although in the 1950's no actual mating was shown, of course.

I was always fascinated by the mating rituals of birds. Often a major part of the ritual was a dance of some sort. Some could be on the violent side but they were always full of beauty.

It was thought that birds only danced to attract a mate. Now researchers are finding that sometimes they dance just for the sheer joy of dancing.

Scientists realized that they were seeing young single birds running, leaping, bowing, spinning, tossing grass in that graceful way that they dance. But they were not trying to impress a bird of the opposite sex because there were none in the area to impress.

Cranes are the birds they have been studying. Cranes of all ages dance any time of the year. It takes very little to put them in the mood to dance. A gust of wind, a floating feather, or a rolling stick could be the trigger. Most often they are in a relaxed state.

So the conclusion is that they are playing. There are five criteria to determine play in an animal. 1) It is a repeated behavior, 2) It does not contribute to survival, 3) It is spontaneous and voluntary, 4) The animal is healthy, and 5) The animal is free from stress.

It has long been considered that play was only a practice of humans and a few birds but  more and more animals a exhibiting this behavior. Perhaps all animals do it.

The next question is why do they play? Some researchers think it might be a form of evolutionary advancement. Others see it as a way for young animals to emulate adult animals and learn what they need to know when grown. It may also be a way for adults to keep their mates interested in the adult relationship.

Perhaps we can learn something from the birds.