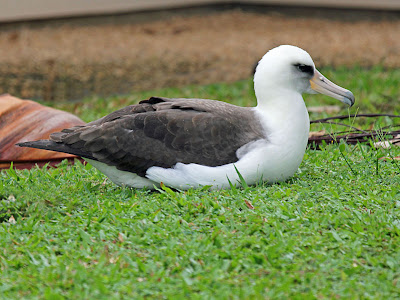 Wisdom is a Laysan albatross. She was first banded in 1956. At that time she was just another nesting bird who were being studied by scientists because of the birds that were flying into US Navy airplanes.

Tens of thousands albatrosses were banded for this study. Researchers wanted to study the habits of the birds to see how they could prevent the collisions with planes and prevent damage to humans and equipment.

Large birds live longer than small ones, as a rule. An albatross is a large bird. The Guinness Book Of Animal Records lists a Siberian white crane at an unconfirmed age of 82 years. Captive birds live longer. Parrots are known to live into their 80's.

Laysan albatrosses live at sea most of the year. They return to Midway Atoll in colder months only to nest. They start nesting at about 5 years of age. So when Wisdom was banded she had to be at least 5 years old. That means she is at least 62 years old now.

When an albatross is nesting they defend the nest. That means they are easy to find and get to. They are not tame by any means but if you know what you're doing, they are not hard to catch long enough for banding.

Living in the wild is not easy for any animal. Natural problems cause injury and death. There are also the problems attributed to man. Albatrosses have choked to death on plastic waste floating in the ocean. They get caught in nets of fishermen. Some of the buildings on Midway Atoll still have lead paint and that poisons the albatross. So living to be 62 is an accomplishment.

In 2002 the scientist that originally banded Wisdom returned to Midway Atoll to check bands on the birds. He collected numbers and went back to match them. That was when he realized one of the birds was Wisdom. Researchers decided to watch her more closely.

It is estimated that Wisdom has flown between 2 and 3 million miles in the years from 1956 now. That equals between 4 and 6 trips to the moon and back.

Even more astonishing is the fact that Wisdom recently hatched a perfectly healthy chick. At the age of at least 62. It's her 6th chick in a row. It's estimated that she has hatched 35 little albatrosses in her life.