Kiss The Blarney Stone To Get The Gift Of Gab 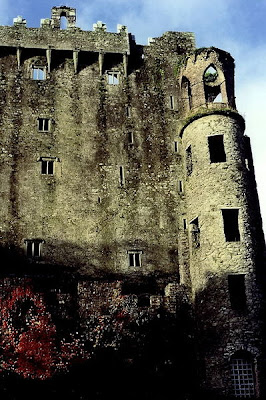 Do you want to be able to hold your own in any conversation? Would you like to insult a person and have them think you are hilarious? Do you wish you could be devastatingly charming to the opposite sex? If you kiss the Blarney Stone these things and many more could be true.


There is a stone there, that whoever kisses,
Oh! He never misses to grow eloquent:
'Tis he may clamber to a lady's chamber,
Or become a member of Parliament.
Francis Sylvester Mahony, Irish bard of
the early nineteenth century

Blarney Castle is located on the southern coast if Ireland near the city of Cork. It was originally a wooden hunting lodge built in the 10th century. Through the years it was enlarged and rebuilt using stone instead of wood.

The name of the castle comes from Dermot McCarthy, King of Munster and Lord of Blarney. Blarney comes from a Gaelic word that means "the plain".

Today much of the castle is in disrepair but the 85 foot high watch tower is kept up for tourists. It is a crumbling limestone structure. Inside is a chapel, kitchen, banquet hall, and other rooms.

At the top of the keep you can look over the castle grounds. You will see forests, a stream, and a garden called the Rock Close. The Rock Close is believed to have been used by the Druids for worship. Landmarks in the Rock Close include the Fairy Glen and the Wishing Steps. The Witch's Kitchen is a fireplace built beneath the roots of a huge tree. The Druidic Circle is a circle of boulders covered with moss that were believed to be the site of religious sacrifices. But you will not see the Blarney Stone in any of these places. 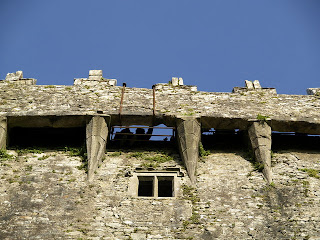 In 1446 The Blarney Stone was set into the tower of the castle. When it was set it was placed so no man could ever touch it.

In those times English monarchs desired to completely rule Ireland. Queen Elizabeth I sent one of her deputies to Cormac MacDermot MacCarthy, Lord of Blarney. She wanted him to cede the rights of his land to the Queen. Cormac was to appear before the Queen to do so but he intended to ask for the rights to the land that belonged to his family. Unfortunately Cormac was not a good speaker and he worried that he would not be able to successfuly argue fo his land.

On his way Cormac met an old woman. She wanted to know why he looked so unhappy. When he told her he was on his way to plead with the Queen to allow him to retain his land she told him about the stone.

When Blarney Castle was built one stone was put into place by a man who said no one would ever be able to touch it again. She told him that if he could kiss that stone he would receive the gift of eloquence.

Cormac rushed back to his castle. He found the stone that no one could touch and kissed it. Then when he met with the Queen. His speech was so soft and his words so fair that he never had to renounce the rights to his land as long as he lived.

Queen Elizabeth I is credited with calling the gift of gab as Blarney. She grew aggravated with Cormac MacCarthy's double talk when he was arguing for his land. After that time whenever she encountered anyone who was trying to use words in a creative way she would say it was "a load of Blarney". 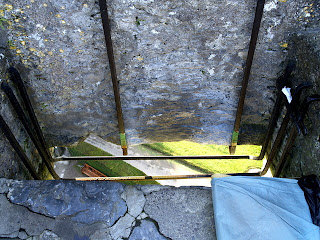 If you cannot touch the Blarney Stone how can you kiss it to get your gift of blarney? You must go to Blarney Castle, climb 127 steps to the top, and go to far side of the battlements. You will lie on your back and stretch backward and down until you can stretch across to kiss the Blarney Stone.

For safety they have installed rails to hold to keep you from falling to an almost certain death. It is also a good idea to have someone hold tight to you just to have additional safety. If you can kiss the Blarney Stone you too will have the gift of Blarney.