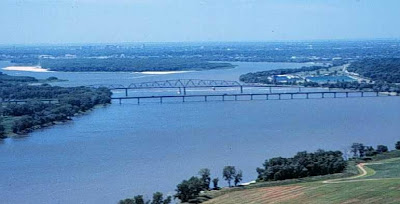 The Mississippi River cuts the United States in half as it runs from north to south into the Gulf of Mexico. It's one of the most important bodies of water in the country.

The Mississippi River still is used to transport people and goods. It's used for recreation of all kinds. And it's astounding to look at. It's so wide and deep.

There are a lot of cities on the banks of the Mississippi. They sprang up to take advantage of the benefits of the river. Until modern water treatment facilities came into use the river was used for drinking water and bath water. It was also used as a way to get rid of wastes.

The land of the Mississippi Delta is some of the most fertile land in the world. The silt deposits build up the land to make it extremely good for farming.

Unfortunately the past few years have not been kind to Old Man River. In 2011 flooding in the Midwest caused all the rivers that empty into the Mississippi River were overflowing. Most people in that part of the country couldn't remember worse flooding.

As the swollen rivers filled the Mississippi, the Mississippi swelled to overflowing too. Eventually dams upstream had to be opened so they wouldn't break and release the fury of all that water. In theory controlled releases helped keep the Mississippi River from taking too much of a beating. In the end officials decided to flood large areas of the Mississippi Delta to try to control the flooding better.

Then came 2012. Drought affected all of the Midwest. Rivers are still at extremely low levels because of the lack of rain. That means less water is flowing into the Mississippi River. The water level of the river is extremely low. Again few people of the area remember such severe conditions.

Both natural disasters have affected the whole world. You might wonder how. Shipping of goods down the Mississippi River constitutes a large percentage of world trade. When flooding occurred it was dangerous for ships to try to navigate the river. Fewer goods were moved that year. This year because of the drought the water level has dropped making it hard to navigate.

Barges still operate in the river. The problem is that they can't carry as much cargo. For each 6 inches of water depth lost a barge has to carry about 100 tons less. In December and January there were about 7 billion dollars in goods that might not be delivered.

Farmers are being directly affected. The farther up the river they live the more they have to pay in shipping rates. It takes more fuel to navigate when the river is lower. It also takes more trips to get the cargo down the river so crops aren't being shipped as fast as they normally are.

All of this means that the cost of goods are going to go up all over the world. We will all help pay for the costs of shipping things.

It just goes to show how the people of this world depend on each other and the circumstances of people half a world away from them. If there are tornadoes in New Zealand, sandstorms in the Middle East, blizzards in Europe, freezing temperatures in Asia, or earthquakes in South America we are all affected because we are all connected.
Nature News Bits