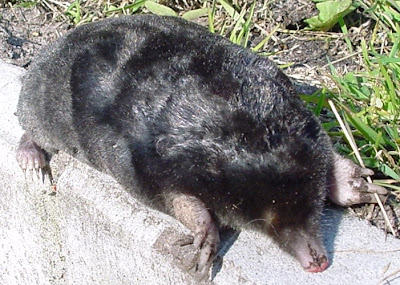 Moles are those pesky little critters that leave molehills all over your yard. It's unbelievable how many of those hills one mole can make. And they are almost impossible to get rid of.

Moles are underground animals. they like earthworms the best of all the little things they eat. They breathe oxygen when they come to the surface but while underground they can breathe carbon dioxide. That way they can stay down there longer.

Moles have short very soft fur. The leather from a mole is very supple. They were popular for making coats and other clothes. But that's not why we are here.

Scientists have wondered how a mole could distinguish between their food and other materials around the food. They can't see and it would be useless under the ground anyway so they must smell their prey.

Well wonder no more. The scientists did some testing and they discovered that moles smell in stereo. That means that one nostril smells one thing and the other nostril smells something else.

First the scientists put out 15 food wells in a half circle. They put a worm in one of the wells. Then they put the mole in the cubicle. Most of the moles tested sniffed a couple of times and went straight to the well with the worm.

So moles smell in stereo. As a matter of fact so do rats. Some think that people can too but others are not so sure. My suggestion is to try it for yourself. See if you can smell the worm with the left nostril or the right nostril.
Nature News Bits