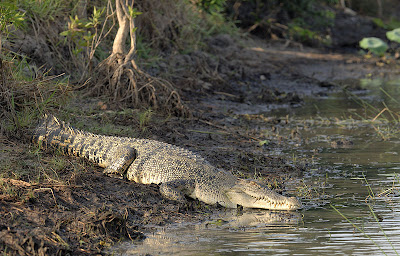 Lolong the world's largest crocodile in captivity has died. Lolong lived in
Bunawan Eco-Park and Research Center located in Bunawan township in the Philippines.

Lolong was a saltwater crcodile. Saltwater crocodiles are the largest of the living reptilians, larger than even the Komodo dragon. Lolong was 20.24 feet long and weighed about 2370 pounds.

Saltwater crocodiles are found along the Pacific Ocean from Australia to the Philippines and were found in southern Asia although there are fewer sightings of them there now. These reptiles are also found in freshwater tributaries.

Because of their huge size saltwater crocodiles prey on pretty much whatever they want. Young ones will eat smaller animals but they are also eaten by larger animals including larger crocodiles. A grown crocodile can kill and eat large mammals including people. They don't eat often so they spend a lot of their time in a more docile existence.

Females lay between 40-60 eggs in a nest made of plant materials. Both male and female stay fairly close to the nest to guard the eggs. Because this is done during the rainy season a lot of eggs are lost to flooding. More are lost to predators even though the mother is guarding.

To get a male crocodile baby the nest must be at about 31.6 degrees centigrade. Deviation from the temperature will result in females.

The female will gently roll the eggs over with her mouth to aid in the hatching process and even answer to sounds to assist the actual hatching. Then she gently carries them in her mouth to the water after they are hatched. She will stay with them intil they are about 8 months old.

Lolong was captured in the Philippines after a fisherman, a child, and several water buffalo went missing. It took about three weeks to capture him in steel cable traps.

In spite of being afraid of Lolong the people made him into a popular attraction at the zoo. He was used to educate people about crocodiles.

Now the approximately 50 year old crocodile has died. He was found with his stomach bloated. They tried immersing him in warm salt water to regulate his temperature but it did no good. An autopsy is being performed to determine the cause of his death.