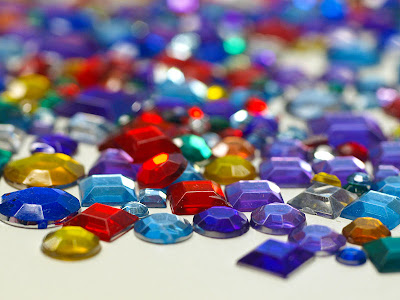 The song says that diamonds are a girl's best friend. Most engagement rings are designed around a diamond. Why?

Diamonds the hardest natural mineral known. Adamas is the Greek word from which the name of diamond was taken. It means proper, unalterable, unbreakable, and untamed. So the diamond represents fidelity and devotion for a couple.

Gems were believed to be dew drops, raindrops, or tears of the gods that dried and hardened in the sun. This gave them magical properties. Some also thought that the souls of people who had angered the gods were imprisoned in gems. There are meanings and superstitions connected to gems.

Birthstones are gems tied to the month you were born. They are meant to give certain strengths to you because of what they represent for the time you were born.

Each month has several birthstones that depend on where you live or even when.  Some people combine as many as possible into on piece of jewelry to get the maximum benefits. I am going to list the stones for each month. Then I will give more details about one of the most recognized
for that month.

Birthstones for January are garnet, rose quartz, and serpent stone.

By her who in this month is born
No gem save garnets should be worn;
They will ensure her constancy,
True friendship, and fidelity.

Garnets protect the person who wears them from poisons, wounds, and bad dreams. They cure depression, relieve fevers, hemorrhages, and inflammatory diseases. They symbolize lightness of heart, loyalty, and enduring affection. They ward off flying insects and protect against lightning. It will change colors when danger is near. A garnet provides warmth for frostbite and joint aches.

If you obtain your garnet unlawfully you will be cursed. A legally owned garnet guarantees cheerfulness. To give a garnet is to give love's attraction. It is the stone for lovers who travel and can heal broken bonds between lovers. It represents fidelity and commitment.

Peresphone, the Greek goddess of sunshine, was kidnapped by Hades, god of the underworld. Eventually she was released but she was given pomegranate seeds. She ate them which guaranteed that she would return to him. Because garnets derive their name from pomegranate they represent fidelity and commitment.

The February-born shall find
Sincerity and peace of mind,
Freedom from passion and from care,
If they an amethyst will wear.

The  purple color of the amethyst represents royalty. It also stands for piety and sobriety. Goblets made of amethyst are supposed to allow the person to drink as much wine as they wish without becoming drunk. It should help other addictive behaviors as well.

Amethyst protects against thieves, locusts, plagues, nightmares, infidelity, storms, and hail. It changes brightness near poisoned foods. It cures gout, nerve problems, toothache, neuralgia, and headaches. The amethyst will keep one from falling in love foolishly.

Who in this world of ours their eyes
In March first open shall be wise,
In days of peril firm and brave,
And wear a bloodstone to their grave.

The bloodstone signifies courage and endurance.  It is also known as either heliotrope or chalcedony. Babylonians ans Roman soldiers used bloodstone to make seals and amulets.

It has healing powers especially good for nosebleeds. Powdered and mixed with honey and egg, it is used to cure all sorts of hemorrhages. It is used to treat blood disorders like blood poisoning and bleeding from a wound. It is believed to draw snake venom from a bite.

Legend says that as Christ was on the cross a Roman soldier speared him in the side and drops of blood fell from the spear to pieces of dark green jasper lying on the ground beneath the cross. This is how bloodstone was formed. That makes it a favorite material for carving religious scenes. Matteo del Nassaro carved "The Descent from the Crross" so that the red spots of the bloodstone show as the wounds of Christ and the drops of blood on the ground.

Those born in April have birthstones of diamond, sapphire, and opal, quartz, and rock crystal.

She who from April dates her years,
Diamonds shall wear, lest bitter tears
For vain repentance flow; this stone,
Emblem of innocence, is known.

Diamonds symbolize conjugal affection. They stand for courage for a man and pride for a woman.They bring victory and good fortune, all while warding off evil. If a diamond is held in front of a person accused of wrong-doing it will increase in brightness if the person is innocent. If it darkens the person is guilty. Soldiers wearing diamonds will be given strength, invincibility,  bravry, and courage.

Diamonds have inspired stories of romance, power, greed, intrigue, and magic. They are featured prominently in crown jewels. Of course diamond jewelry is appreciated by many woman as a pledge of love.

Perhaps the most famous of the many famous diamonds is the Hope Diamond. In the 15th century a French merchant obtained a huge purple colored diamond that weighed more the 112 carats. He either bought it or stole it from a Hindu statue.

Eventually the diamond came into the possession of the French king who had it recut to a little more than 67 carats and it became the Blue Diamond of the Crown or the French Blue. It passed through several French monarchs until after the French Revolution. Then it disappeared for 2 decades.

Then in London a blue diamond of more than 44 carats appeared and was sold to the king. It is believed to be the same stone. When the king died the gem was sold to help pay his debts. Henry Phillip Hope next owned the diamond and it took the name of the Hope Diamond. After passing through several generations of Hopes, it was again sold to offset debts.

Then it found it's way to Pierre Cartier who hoped to make money from the curse that supposedly befell its owners. He sold it to a woman in Washington, D.C.,who believed she could counter the curse. She had bad things that happened to her but she firmly believed that she had overcome the curse. Jeweler Harry Winston was the next owner of the jewel . He displayed it extensively before donating it to its present home at the Smithsonian Museum.

Birthstones for May are emerald, agate, chrysoprase, sapphire, and beryl.

Emeralds are thought to be aphrodisiacs which may be why they are a symbol of happiness for married couples. They ease the pain of childbirth. The blind are said to receive benefits from touching emeralds. They counter dysentery and epilepsy. They negate snake bite and ward off witches.

Emeralds bring good luck in court. Hold an emerald under your tongue in order to summon evil spirits (please don't). Giving the gift of an emerald on Monday will cause it to lose some of its power.

Emeralds stop bleeding and protect from panic. The green color rests and relieves the eyes. Emeralds can be used to foretell the future.

Conquistadors noticed that the rulers in South America wore emeralds. During that invasion the conquistadors took huge amounts of emeralds from Peru. It was a long time before they finally found the source of these emeralds. They defeated the Muzo Indians to take over the mines. Mining of emeralds have continued almost continuously since. The Muzo mine is the most famous in Colombia and produces the world's best emeralds.

Who comes with summer to this earth,
And owes to June her hour of birth,
With ring of agate on her hand
Can health, wealth, and long life command.
—Gregorian Birthstone Poems

Agate can give the power of invisibility to its wearer and will turn the enemies' swords on themselves. It gives protection from the evil eye and  gives a gift of eloquence. Agate protects against storms, lightning, and fever. It gives health and long life. It even cools boiling water.

It cures fever as well as poisonous bites and stings. Agate increases fertility and makes the person wearing it lucky in love. It improves eyesight and makes one lucky in sporting competitions. It reveals where hidden treasure is buried. Agate ensures a good crop when fastened to the plow.

Agate is often used in artwork and jewelry. A Presbyterian church in Oregon has 6 windows with panes made of agate collected from local beaches. The "Rubens Vase" is made from a single piece of agate. This beautiful sculpture has high relief leaves all over it. It was probably created in an imperial workshop for a Byzantine Emperor.

Next time we will learn about the birthstones for the rest of the months.

The answer to last week's Who Am I? is snowflake. Congratulations to all who guessed correctly.