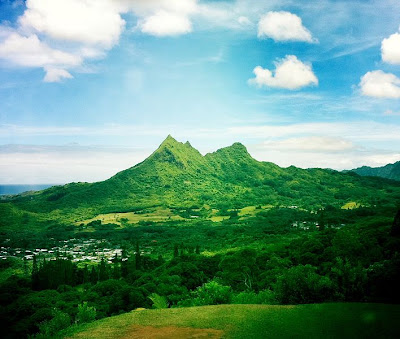 Those lush mountains of Hawaii are going to disappear according to a study by geologists at Brigham Young University. Someday the islands might be as flat as Midway.

The study shows that the mountains are being dissolved by groundwater. The below-ground streams are mixing with the soil from the mountains and washing out to sea.

All of the Hawaiian Islands are made of one kind of rock so the same underground conditions might apply to all. The weather variations among the islands make above ground conditions different for each island.

The interesting thing is that even though the mountains are flattening, at least some of the islands are growing. Oahu for instance is moving in a northwest direction. Because of the tectonic plates the movement and the slow rising of the island are making it larger in size.

So don't worry about making vacation plans to Hawaii. It will be around for a long time. It might be a little flatter though.
Labels: Nature News Bits