The King Is Dead 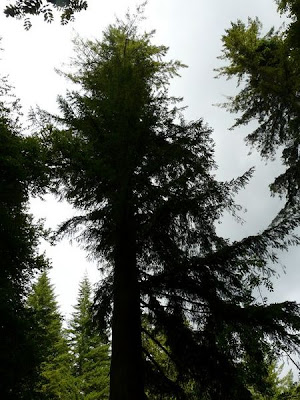 A Douglas fir tree known as "The King" has been taken down. The King was the tallest tree in the Coed y Brenin Forest in Snowdonia National Park in Northern Wales. The 180 foot high tree has towered over the other trees in the forest for about 85 years.

Coed y Brenin is translated from Welsh into English as King's Trees. Douglas fir trees are native to North America. Seeds were sent to Britain in 1827 by David Douglas, a Scottish explorer, who found them in the Rocky Mountains..

Guarding The King are a stand of Douglas fir trees called the King's Guards. The King's Guard Trail leads you right up to the spot where The King used to stand.

The King had become a danger to other trees because it was full of rot and in danger of falling over. It's trunk was splitting and the tree was starting to lean.

Forestry workers took the tall tree down in sections to protect the trees around it. Normally a tree taken down would be sent to a mill but because The King is a historic tree it will be kept in the Park in some form. Plans to make benches and maybe other items are being investigated.

Now the search is on to find a new king. There are a lot of tall fir trees so it's just a matter of time before one claims the honor.