Tales From The Everyday Adventurer: Alice and the Toad Prince 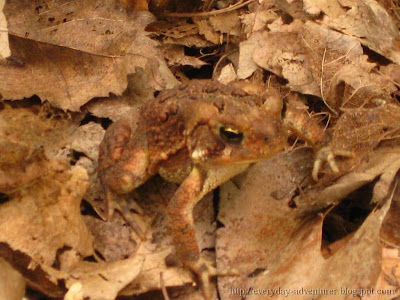 I'm back again with another one of my old tales about my little friend Alice. I originally told these stories on my blog The Everyday Adventurer a few years ago when Alice was still a little girl. Nowadays Alice is almost grown up so she's having her own kind of adventures. But I thought these older adventures could show you some of the fun one little girl used to have with nature. Let's get to it.

It has been a long time since I last had a visit from my little friend Alice. I was finally able to drag her away from her favorite cartoon, Scooby Doo, so she could go on a short hike with me. I thought she might like to see some of the warm weather animals I've been visiting in one of my favorite nature parks.

We were in luck because there were many of them that came out to see Alice for the first time. It's not every day that you get to meet a big star from Wonderland like Alice, so I think most of the animals were pretty excited. I didn't see that evil squirrel Mr. Nutz out there anywhere though. I think he's afraid of her.

A black squirrel greeted us at the front of the park, but it ran as soon as I tried to get its picture. Next were the young geese that I've been watching. They thought Alice was about the best creature they had ever seen, so they swam over to see her. Even the cormorant lake monster was there. I was glad because I know Alice had never seen that before. 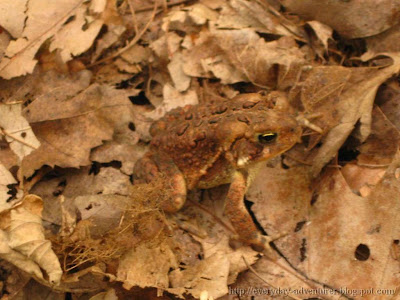 After visiting with many of the animals at this nature park, and getting another look at the dam, Alice and I headed back to the trail. As we were walking back through the darkest part of the forest a big toad hopped over to the side of the trail and stopped and stared at Alice.

I was the first one to see it so I looked at her and asked her if she wanted to see a toad. She likes all animals so we stopped to see this new wonder. As I began taking my pictures of this toad I told Alice to pick it up. She of course refused. I teased her and told her if she kissed this toad it would turn into a prince.

Little Alice looked at me and said that all that would happen is that the toad would pee on her and give her warts. She then said she would beat it up if it turned into a prince anyway. Just like me, little Alice is Irish, and that's how we handle just about everything. So since I didn't want a punch in the stomach I decided that we should probably move on our way. 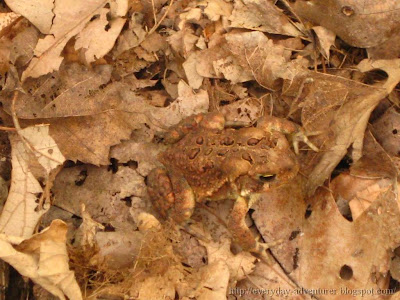 I looked back once at this poor toad still waiting there beside the trail. I guess it would never know what it would be like to be a prince. Alice was probably right that there would be no prince, because it was actually a frog in the old story that became a prince. Maybe this toad was just trying to fool us.

Alice quickly forgot this incident, but she did like seeing all of the animals, even the toad. I think she was probably glad that the snakes didn't come out to meet her though. As we arrived back at the front of the park Alice happily began practicing her skipping. She had been having trouble learning that, so she's glad she figured it out.

After we had seen all of the animals and flowers we could, and after Alice got to pick out a very good stick to wave around at her brother, we decided it was time to go. I took Alice back to Wonderland so she could go back to watching her cartoons. She likes going on adventures, but she really likes her cartoons just a little bit more.

Any of you who have never met my little friend Alice can click here to read about some of her other adventures on these trails with me.
Tales From The Everyday Adventurer