Posted by Emma Springfield on November 29, 2012 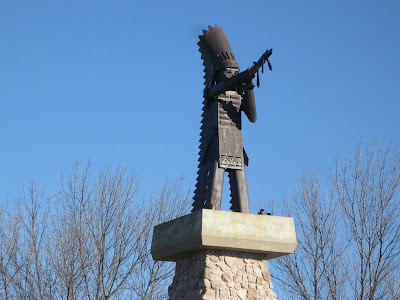 At the very peak of a bluff high above the Missouri River a majestic statue looks out over the river. A steel sculpture of an Indian chief smoking a peace pipe is surveying this area of Nebraska, Iowa, and South Dakota. His English name was War Eagle.

The story of War Eagle is a unique and yet representative look at how the United States expanded. It is a story of how both Native Americans and white men learned to deal with each other to settle this place.

I am not saying that everything is perfect. Nothing ever is. But War Eagle worked at getting along with white settlers, trying to make things easier for his family. White settlers responded in kind.

Born in either Minnesota or Wisconsin around 1785, War Eagle was a Santee Sioux also known as the Isanti. His name was Wambdi Okichize. He was also called Huya-na which translates into Little Eagle. He was known to most as War Eagle.

War Eagle married Mazakariwin. At a young age he left his Isanti tribe. There was to be a bloody contest to determine the new chief and he wanted no part of it.

War Eagle and his wife traveled to the Dakota Territory and were adopted into the Yankton Sioux and eventually he was chosen as a chief due to his wisdom and bravery.

Seven children, four girls and three boys, were born to War Eagle and Mazakariwin. His family made him realize even more that it was important to live with rather than war against the white men.

War Eagle worked closely with white men and did his best to convince all the Sioux to do the same. The Sioux were known as a fierce and combative people. War Eagle's tribe of Yanktons were known as the "bad ones" because of their fearless raiding parties. 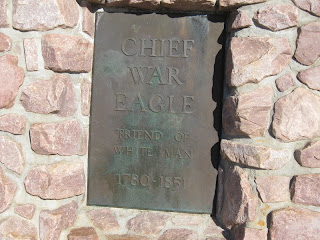 History says that War Eagle would fight bravely against the Sioux tribes that were warring with his tribe. But he refused to send his warriors to fight white men. Because he showed such bravery while standing for what he believed, he was considered very courageous.

Several times war councils were held and each time War Eagle refused to move against the white men. At one war council held in what is now Stone Park he stood firm that his warriors would not participate in the massacre at Spirit Lake.

War Eagle fought on the side of the Americans during the War of 1812 as did his tribe. Many other tribes took the British side. One of his contributions to the war was as a courier. Later his warriors escorted the United States mail between trading posts.

A riverboat pilot was one of War Eagle's adventures. He often transported trappers and their wares up and down the Missouri River. It was probably on the river that he met Theophile Bruguier a trapper who was originally from Canada. 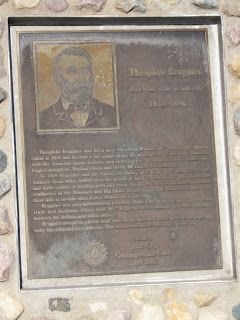 Theophile Bruguier was described as an extremely good looking man. He adapted well to the ways of the tribe and was accepted as one of them. Eventually he married War Eagle's daughter. As was the tribal custom he also took her two sisters as his wives also. As time went on one of the sisters married another trapper but two of them remained with him until their deaths.

In a dream Bruguier saw a fertile spot at the joining of two rivers. He had made his home there. He told War Eagle about his dream. War Eagle had been to that place and took him where the Big Sioux River and the Missouri River join together. A cabin was built and Bruguier moved there with his wives. This made him the first white settler in the place that eventually became Sioux City, Iowa.

War Eagle was still piloting along the Missouri. His drinking and poor health led to him not being able to do that any more. He moved in with the Bruguier family. Bruguier and his two wives had thirteen children.

At one time War Eagle attended a conference in Washington D.C. with other tribal chiefs. They were there to establish treaties of peace. While he was there War Eagle received a Silver Peace Medal. It was presented to him by President Martin Van Buren and War Eagle counted it among his most prized treasures. His family still has it and displays it proudly. He also was the very proud owner of a cane that was made using wood from Mount Vernon, George Washington's home.

When War Eagle grew older he found that the United States government was going to take all the land east of the Mississippi River from the Indians. He became disillusioned because he had worked so hard for harmony between the two peoples. War Eagle died in 1851 in the Bruguier cabin. The cause of death was exposure due to his drinking.

Before War Eagle died he told Theophile Bruguier that he wished to be buried on the bluff that overlooks so much of the land and the two rivers. Today his grave is still there. Many of his family are buried there with him, including his beloved son-in-law, Theophile Bruguier.

War Eagle is fondly remembered in Sioux City as a friend to the white man. Without him Sioux City might not exist. A monument headstone was placed on the grave site. Vandals chipped away at it and over the years the wording was almost unreadable. 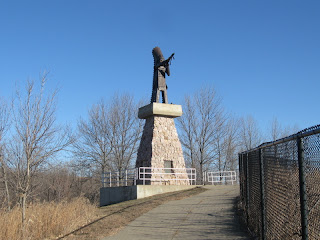 Sioux City decided to put a more permanent monument to War Eagle and make it harder to inflict injury on it. This is the magnificent statue you see today. It is visible from the highway that runs below the bluff  and beside the Missouri River. An area has been designated as War Eagle Park and contains this small family cemetery. The only markers visible are those of War Eagle and Theophile Bruguier.
Legends And Superstitions