Alice Is Tempting Me

Posted by Emma Springfield on November 19, 2012 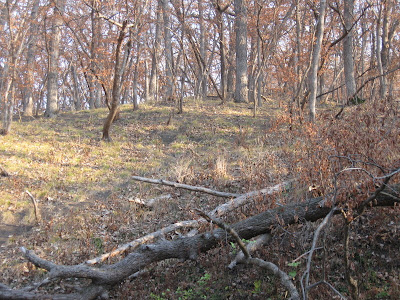 I recently spent a little time with Ratty, The Everyday Adventurer, who is also the editor of Nature Center Magazine. He is feeling better in some ways and not so good in other ways. I thought you might like to know.

Ratty is a wonderful host and he saw to it that I had a good time while I was there. He took me sight-seeing and I really enjoyed all of it. But I did have a bit of a problem and I would like to tell you about it.

I have known Alice, the Alice who has shared her adventures with Ratty, all her life. She introduced all of us to Wonderland and the amazing things that happen there. Sometimes Wonderland spills over into our world when Alice is around.

Ratty took me to Stone State Park because it is one of his favorite places. He and Isabella wanted to go down to Turtle Creek. Physical limitations kept me from going that far. There is plenty to look at and experience in the area I chose to explore.

After Ratty and his dog headed toward the creek I noticed a little old wooden cabin back up in the trees. I wanted a picture of it so I went to the edge of the trees and there was nothing there except trees. What a puzzlement.

I heard a rustling in the leaves but saw nothing. I now know that it was the White Rabbit but I was just a little slow that day.

If you have been reading Nature Center Magazine you know what happens to dragons when it is too cold. Well, Stone Park must be a favorite dragon hang-out because I saw their remnants everywhere. 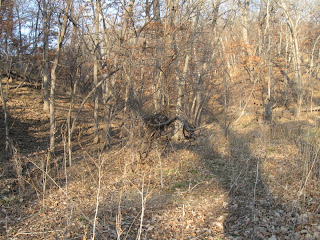 I sat down to catch my breath a bit. Suddenly there was a shadow right in front of me. It was a dragon flying overhead. None of the pictures I took of the dragon turned out but pictures of the shadows are quite clear. 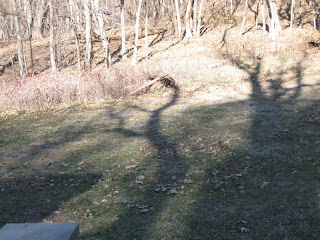 It was then that I realized that Alice wanted me to come visit her in Wonderland. What a tempting invitation. But I was visiting Ratty and he would have been frantic trying to find me if I had gone to see Alice right then.

I moved slowly back to Ratty's truck to wait for him and Isabella. I looked into the trees and saw an old split rail fence. You seldom see any like that so I went to take a picture. You may have guessed that by the time I got there the fence had disappeared.

Alice was being so persistent. Next time I go for a visit I will make a point of seeing Alice.

On the drive out of Stone Park I looked into the trees and saw a large pink squarish stone. I pointed to it and asked Ratty if he knew what it was. He saw nothing. I will bet it was the block they used when the Red Queen yelled, OFF WITH THEIR HEADS!"

That was my last glimpse of Wonderland for the day.
Nature Tales