White Tigers: Are They A Different Breed? 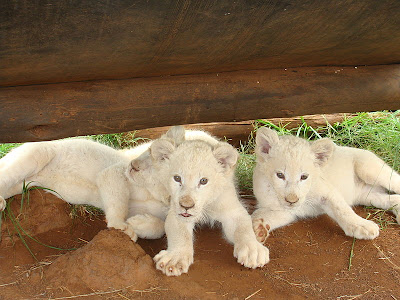 In September of 2012 at the Zoo Liberec in the Czech Republic a tiger mother gave birth to tree cubs. The mother is Surya Bara, a rare white tiger. The three cubs are also white tigers. White tigers are sometimes called chinchilla tigers or snow tigers.

White tigers are Bengal tigers. They are not a different species of tiger nor are they a subspecies. And they are not albino. The reason they are white is genetic. There is a recessive gene present in some Bengal tigers. If one of those tigers mates with another who has the same gene it is possible that they could have a white offspring. As a matter of fact it happens that cubs born at the same time can be a mixture of normally colored orange cubs and white cubs.

About one in 10,000-15,000 births will result in a white cub. Their fur is various shades of white. They have black or brown stripes although there have been reports of pure white tigers. Usually even they have very light colored stripes however some zoologists believe that continued breeding of the white tigers is breeding the stripes away. They have pink noses and round blue eyes. The backs of their ears have a spot on them that resembles an eye.

Stories of white tigers have been told for a long time. It is said that a Maharaja in India killed a white tiger while on safari with his guests. She had 4 cubs. One was white. The orange cubs were killed and the Maharaja offered the thrill of killing the white cub to his most important guest who declined.

The Maharaja's father had captured a white tiger in 1915. This Maharaja decided in 1948 that he wanted to capture one for himself.

He used water as bait and captured his thirsty white tiger in a cage. It was kept in an unused palace. The white tiger was named Mohan which means Enchanter. All of the white tigers in captivity today are descendants of Mohan.

In the wild there have been reports of people seeing white tigers but none have proved to be true. It is far more rare for white tigers to appear in the wild perhaps because a male and female who share the gene necessary to produce a white cub don't mate as often. When they do there is only a one in four chance that there will be a white cub.

The reason that the population of white tigers is growing is because they are bred in captivity. It's too bad that in order to make sure they get white cubs, interbreeding has happened too often. Because of the interbreeding and maybe because of genetic defects there are several abnormalities. Crossed eyes are caused by incorrectly routed visual pathways in the brain. Other defects are shortened tendons of the front legs, twisting and turning of the neck and looking upward  (known as star-gazing), clubbed feet, deformities of the spine, retinal degeneration, and abnormal kidneys. In the United States some of the inbred white tigers look similar to bull dogs with a snub nose, a jutting jaw, domed head, and wide-set eyes with an indentation between them. There is some thought that diet could play a factor however. Another side effect of inbreeding is that the white tigers are less fertile and more prone to miscarry their young.

Since inbreeding seems to be the reason for all these problems some zoologists are attempting to mate white tigers with orange tigers that carry the white gene. They are hoping to strengthen the new offspring this way.

White tigers are slightly larger than regular Bengal tigers. That gives them a slight advantage in the wild. They are fast and strong when hunting the animals that they prey on for food. Those animals are goats, water buffalo, antelope, and farm animals. Unfortunately the white color can't be used as well for camouflage and that is a definite disadvantage.

As with any white animal white tigers are sought by humans for many things. The fur can be used for clothing. Different body parts are used for various reasons. Bengal tigers are in danger of dying out. White Bengal tigers even more so. Hunters would love to have a trophy head of a white tiger over the fireplace. Tiger meat is a delicacy in a lot of places. Poachers are willing to kill them for the money all their parts will bring.

The habitats they live in are shrinking. More and more human villages are taking over the space. Killing Bengal tigers is illegal so they are becoming more bold about entering the villages. Problems could be ahead.