Origin Of The Jack-O'-Lantern 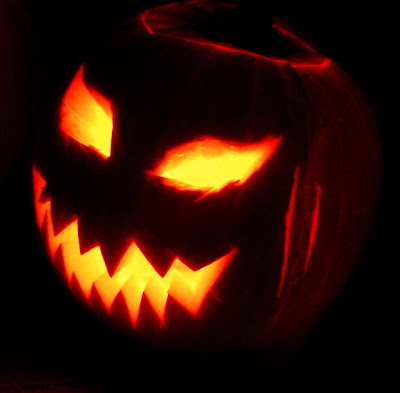 This is a retelling of the story from last year. I liked it so much I decided to offer it again. I hope you like it.

Stingy Jack was well known around his part of Ireland. He liked his drink and was thought to take liberties with other people's property. He cheated, deceived, and misused anyone he could. Stingy Jack did not particularly care what others thought of him. All that mattered to Stingy Jack was Stingy Jack and his comforts.

Now the devil had been keeping tabs on him. Stingy Jack was a prime candidate for the devil's domain.

One night after a night of heavy drinking, Stingy Jack was stumbling home. He came upon a body lying in the road so he stopped to see if there was anything of value in the pockets.

Suddenly the body moved and jumped up. Stingy Jack realized that it was the devil and Jack's earthly time was to end. But he was not ready to go.

Stingy Jack asked for a last wish. The devil saw no harm in granting a final drink to Stingy Jack. Off they went to the pub. Stingy Jack was a frequent patron and knew the bartender well. As the duo walked through the door the bartender smiled. When Stingy Jack got the best of somebody, the bartender got a nice part of the take.

Stingy Jack proceeded to have a sample or more of every type of drink in the pub. When he finished he told the devil to turn himself into a silver coin to pay the tab. He promised that he would get the coin back so the devil could change back into himself.

The devil turned himself into a coin of silver. Stingy Jack grinned at the bartender who grinned right back. Stingy Jack dropped the coin into his pocket which just happened to also contain a crucifix. The crucifix took away all of the powers the devil had. He begged and begged to be set free.

Stingy Jack, being the kind-hearted soul he was, said he would set the devil free IF the devil would promise not to take his soul for 10 years. Of course the devil agreed.

Ten years passed with Stingy Jack continuing in his evil ways. The devil appeared as he said he would. Stingy Jack knew his time was up. The devil had Stingy Jack by the arm ready to take him to Hell. Stingy Jack asked if the devil would climb the apple tree they were standing next to and pick an apple for him to eat on the way. The devil heaved a heavy sigh and climbed the tree.

While the devil was picking a nice apple Stingy Jack hurriedly surrounded the tree trunk with crucifixes. The devil was stuck in the tree.

Once again the devil found himself pleading for his freedom. Finally Stingy Jack made the devil promise to never take his soul. The devil begrudgingly promised. Stingy Jack took the crosses and happily went home knowing that he had outsmarted the devil.

Stingy Jack continued his evil ways but eventually he died as everyone does. He sat and waited patiently for his turn to enter Heaven. When he approached the gates he was turned away. He was told that he was far too evil to be in Heaven.

With resignation Stingy Jack went to Hell. He knocked on the gates and the devil met him there. The devil reminded Stingy Jack of their agreement and told him that since he could not have the soul there was no place for him in Hell. He was doomed to wander in nothingness for eternity.

It was Stingy Jack's turn to plead. Eventually the devil agreed to give him an ember to light his way through the darkness. Jack placed it in a hollowed turnip or rutabaga to keep from burning his fingers.

Stingy Jack came to be called Jack Of The Lantern or Jack-O'-Lantern. At certain times of the year, such as Halloween, when the world of the dead is close to the living Jack-O'-Lantern is seen wandering.

In Ireland during Halloween the living tried to make sure the dead cannot cross back. They began leaving meals on their doorsteps to keep mischief away. If they had to be out in the night they would wear masks and costumes to fool the spirits so that they would not be molested.

Carved pumpkins called Jack-O'-Lanterns are placed on the doorstep to remind spirits of Jack-O'-Lantern and his plight. They do not want to be caught in between the worlds of the afterlife so they avoid any house that is protected by the Jack-O'-Lantern.