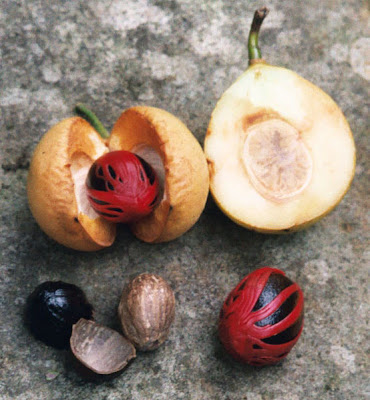 Nothing is quite as soothing on a rainy afternoon as curling up with a good book, covered by a light blanket, and drinking a cup of tomato soup generously sprinkled with nutmeg. It is a guilty pleasure. Nutmeg is the key. I believe it is time to learn about this incredible spice.

Nutmeg is the seed found in the fruit of an evergreen tree called Myristica Fragrans. As you can see in the picture the fruit is cut open like a peach and the pit is an egg shaped aromatic nutmeg. The red covering is mace, another wonderful spice. The fruit can be used to make jelly and candy.

The best nutmeg comes from the Banda Islands of the Caribbean which are also known as the Spice Islands. There are other places in and around Indonesia that produce nutmeg too.

Essential oil of nutmeg is made by steam distillation of ground nutmeg. It is used in perfumes and medicines. It is also used in syrups, beverages, baked goods, and candy.It is easier to use than ground nutmeg because it mixes evenly and does not clump.

The most common use for most of us is powdered nutmeg. We use it in cooking and baking. As nutmeg becomes more popular many people are using small fine graters to make use of fresh nutmeg. It can even be burned like incense.

In the first century A.D. Pliny, the Roman author, told of a tree bearing nuts with two flavors. Roman streets were fumigated with nutmegs before the coronation of Emperor Henry VI. Arab merchants took nutmegs to Constantinople in the sixth century. By the fourteenth century half a kilogram of nutmegs was worth the same as three sheep or a cow.

In order to control nutmeg production in the East Indies, the Dutch waged a bloody war. They massacred and enslaved the inhabitants of Banda. In 1760 the Dutch controlled the nutmeg market. To keep the prices high they actually burned Amsterdam warehouses that were full of nutmeg. The artificially high prices in London were eight-five to ninety shillings per pound. The Dutch maintained control of the Spice Islands until World War II.

Pierre Poivre took nutmeg seedlings to Mauritius The French effectively ended the monopoly the Dutch held on the nutmeg market. Then the British East India Trading Company took young trees all over southern Asia where they flourished.

Between 10,000 and 12,000 tons of nutmegs are produced every year. It is a valuable crop and just a small portion of that total can make a person quite wealthy.

Personally, I add a touch of nutmeg to almost any recipe that calls for cinnamon. It adds a bit of body and a spicier flavor. Apple pies definitely taste better. Cherry pies not only taste a little better but the nutmeg lightly sprinkled on the crust makes it look appealing too.

Nutmeg is used to flavor other things we use. Toothpaste benefits from the tangy flavor of nutmeg. And it helps fight bad breath.Some cough syrups have nutmeg in them. Dentists use nutmeg to give relief from toothache. When nutmeg oit is rubbed on joints like knees or knuckles, you will experience easing of arthritis pain.

Some soaps make your skin tingle just enough to feel refreshing. Many of them contain nutmeg. Massage oils often use nutmeg. Besides the relaxing tingling, the warmth provided by the nutmeg helps loosen muscles.

For your skin a scrub made of nutmeg powder and lentil powder will help remove blackheads. Nutmeg mixed with honey makes a paste that you apply to the acne marks.

Oil of nutmeg is used to disguise the taste of some drugs. It is also used to stimulate appetite, soothe an upset stomach, and reduce flatulence. Nutmeg helps prevent nausea and vomiting, diarrhea, and abdominal pain.

Chinese medicine uses nutmeg to treat impotence and liver disease. In the Middle East they use it in love potions and as an aphrodisiac. Germany uses nutmeg for stomach and intestinal problems but there is much controversy about the use.

Nutmeg is also used to treat anxiety and depression. A bit of nutmeg in a glass of warm milk calms the system and allows sleep.

For all the seeming benefits there are some dangers. As with any health treatment you should consult your doctor before trying anything new. And there are some negative effects from using nutmeg.

Nutmeg has hallucinogenic properties. The stronger the dose, the more dangerous it becomes. Side effects range from blurry vision and headache to death. In between those extremes psychosis, hallucinations, seizures, heart palpitations, rapid heart beat, body pain, nausea, and dehydration can occur.

Pregnant women should not use nutmeg for anything other than a seasoning on foods. Overuse of nutmeg can have a narcotic effect on a fetus. It can raise the infant heartbeat to dangerous levels. And it might cause miscarriage.

Some people use nutmeg in the same way they might use any illegal drug. They snort, smoke, and orally use it. The one thing they do not do is inject nutmeg. It is almost certain that will cause death.

In some places nutmeg is mixed with different substances and used as snuff. Some of the mixtures contain other things like snuff, betel, and wine.

Nutmeg is especially dangerous for animals. It acts like an amphetamine and speeds the heart rate. Animals react strongly to something like that so death can be a common result.

Nutmeg is delicious and enhances the flavor of many types of food. If used safely and correctly it can be a beneficial medicine. That is what we will do.
Nature Tips