A Nature Walk With: Michael Peverett 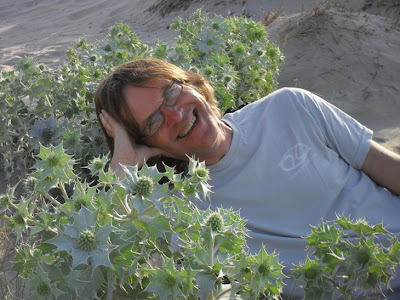 Here is a picture of Michael Peverett lounging in a patch of sea holly, also known as Eryngium maritimum. He seems quite at home.

Michael's blog consists of whatever catches his fancy as he writes. You can find beautiful pictures of flowers and mountain tops. Perhaps Wordsworth will leave a poem. You just have to check in periodically to see what the topic of the day will be. So let us take a nature walk with Michael Peverett.


01. Welcome to Nature Center Magazine. We are all anxious to learn a little bit about you. Tell us what your blog is all about.

I just use it to have fun and, I hope, to entertain a few passers-by. It doesn’t have a theme though, of course, I often write about nature, especially nature in Somerset where I live. Just looking at my most recent posts, they were about: some wild flowers that I saw when I went to Sweden recently, a Swedish ballad singer, the history of bread crops in Sweden, a common species of grass (Deschampsia cespitosa), organic milk in McDonald’s restaurants, a little-known booklet of translations of Spanish poetry, the amazing alien species Giant Hogweed (Heracleum mantegazzianum), and a rather rare plant called White Mullein (Verbascum lychnitis). And there are also some poems and poem translations of my own. I hope that gives you a feeling for the kind of things that interest me.


02. Everyone has their own unique story about what gave them the idea to
start blogging. What is yours?

I was already doing a lot of on-line writing about literature and poetry; that is my specialism, really. The blog gave me the opportunity to widen my range, because one of the fantastic things about blogs is that anyone can write about anything. You don’t have to be a professional. So, for example, it gave me a space where I could write about wild flowers, which is a subject that’s absorbed me for thirty years, though I am not a professional botanist and I don’t know half so much about it as I’d like to.


03. What do you enjoy about nature and what benefits do you derive from it?

Ever since I was a child I have escaped into nature. But I was frustrated that though I liked to be out there it didn’t seem to speak to me in a detailed way. I knew nothing about what I was seeing. I think I am not a very observant person. It was only when I was a university student (in English Literature) and I had a lot of time on my hands that I discovered, in the summer of 1982, that I was able to identify wild flowers. For some reason I had bought myself a book about UK wild flowers, called The Wild Flower Key, by Francis Rose. I began to learn how to look at the confusing richness of nature and to analyze what I was seeing: the shapes of leaves, the different kinds of growth and the parts of flowers. Biology had only bored me at school. I think it was precisely because I found observation more difficult than most other people do that I found discovering and recognizing plants such an absorbing activity. It gave me a sense of wonder that has never left me since.


04. Each of us has our own way of being with nature. Some people hike,
some take pictures, and some climb trees. How do you experience nature?

In those early days I used to go off on expeditions hunting for wild flowers I hadn’t seen before and eagerly marking them in my book. But as time went by I realized that nature interest is inexhaustible, and that it’s possible to be fascinated merely by what I drive past on the way to work or by the weeds at my front door or the trees in a park. There’s so much that we filter out because we don’t understand it. And one of the things that particularly interests me is the relationship between humans and nature, which perhaps is easier to study in everyday habitats. Grass, weeds and road-verges are in a way more important to us than rare alpine flowers, because they are around our homes and workplaces and amenities. We have to deal with them, and they with us. Using a digital camera, with a macro setting (which they all have) has added a new dimension. Of course it is still a huge thrill to see a plant I’ve never seen before in a remote and exotic place such as the top of a mountain. But I think for me it’s an even deeper thrill to learn more about some humble and neglected plant that I walk past every day.


05. Tell us about the most exciting or scary nature related thing that
ever happened to you.

For most of us who live in affluent western nations the most threatening aspect of nature is weather! Even a city becomes a thrilling wilderness in really terrible weather. Once I went for a walk in April up a mountain in the English Lake District called St Sunday Crag. It was fine sunny weather down at lakeside and I was completely unprepared for what awaited me less than a thousand meters higher up. It was a gloomy snowscape, bitterly cold and with tilted icefields where a slip would send you plummeting. With the right gear it wouldn’t have been very scary at all, but in my unspiked shoes and a thin jacket and no gloves I felt I learnt something about the power of mountains that day.


06. If you were to take us on a nature tour of your area where would you
take us first?

I live in a town called Frome, in Somerset. The landscape is not especially dramatic, but Frome happens to lie exactly on the border between the younger geology of the south-east and the older rocks of the north and west. I would like to take you to a little chalk hill a couple of miles away called Cley Hill, because it’s a fabulous viewpoint to see the geological border that I’m talking about. And besides that, it has lots of very lovely and quite unusual flowers.

Describe what we would see.

Cley Hill is a chalk outlier that has been cast adrift on a ridge of what geologists call the Lower Greensand. So looking southwards you would see this ridge winding away towards Dorset. The ridge is very distinctive because its sandy, acid soils are ideal for growing conifers and so you would see the big fir plantations of ancient stately homes like Longleat and Stourhead all along that ridge, so different from the landscape to both east and west.

Looking eastwards you would see the edge of the great chalk plateau called Salisbury Plain, one of the emptiest places in southern England. Chalk is the youngest limestone, from the Cretaceous era, a mere 100 million years old. Today, Salisbury Plain is an unfriendly wilderness. Most of it is used for army training and is out of bounds to visitors. Yet in the earliest days of humans living in England, Salisbury Plain was the centre of population and civilization, the London of its day, as can still be seen from the huge stone temples of Avebury and Stonehenge.

Looking northwards you would see the broad ribbon of the Jurassic limestone that makes the Cotswolds. It looks a quiet landscape but it is a bleak one to farm, windy and with poor soils. Yet these are also the hills that surround the ancient city of Bath, thought to be the oldest continuously inhabited place in Britain, because of its hot springs. Hot water was a scarce commodity once!

Then we’d look west, and there before us is the Carboniferous limestone of the Mendips, stretching off to the coast. This is the ancient and tough limestone that forms cliffs, gorges and caves; the limestone that is crushed into chippings for our road surfaces. All of these different limestones have their own special plants, so I feel very lucky to be standing here.

Which reminds me, it’s time to look down at our feet. The sides of Cley Hill are so steep that the chalk comes close to the surface and supports a very ancient plant community. And, also because of the steepness, they have never been ploughed up. In late April we might find the elusive early gentian (Gentianella anglica), one of the rather few plants that is found only in Britain. In summer the sides are spotted with colourful orchids. Even now, in September, we can find a tiny white orchid called Autumn Lady’s-tresses (Spiranthes spiralis) which grows in a twisting spiral like a wavy lock of hair.


07. If you could visit any nature spot in the world, what would it be?
Tell us why.

Well, I would like to go to the mountains in the far north of Swedish Lapland. My family is Swedish and I do go to the north of Sweden for a week every year, but there’s so much of it, there is always a further north that I don’t ever have time to go to. Here in the short summer of the Midnight Sun I might for the first time see Ranunculus glacialis on the edge of the snow-line, with the reindeer herds browsing somewhere below me, and I’d feel content. But of course I am romanticising. I don’t really care if I never get there. The mystery of nature also lies, a few yards from my home, in the rainy impenetrable bramble-thicket on the banks of the railway line.

The blog is a public form but it is also a private one. Try to take risks and surprise yourself and express yourself. Try to find out something new and find a way of writing about it. Because after all, you will not interest others if you don’t interest yourself.


09. Where can our readers find you? Give us the name and a link to your
blog. If you have more than one to share, we would all like that too.

My blog is http://michaelpeverett.blogspot.com. There’s an index to all the plants I’ve written about in the right-hand column.


10. Is there anything we have not discussed that you would like to add?

No, I am keen to be writing something else now! – but thank you for inviting me to interview, and I hope you have a lot of success with Nature Center magazine.

Thank you, Michael. It is obvious that you have a deep affection for your place in the world. You are also open to feeling affection for new places. It is time now for us to visit your blog to see what you are sharing today..

Do you write a nature related blog and you'd like to be interviewed by Nature Center Magazine? Click the link and let us know who you are and that you'd like to be featured in a Nature Walk: Interview Me.