All About Bengal Tigers 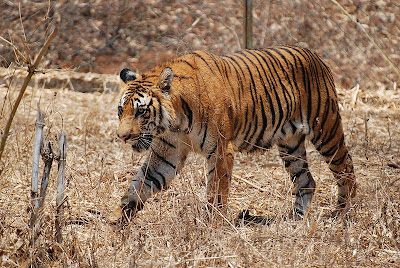 The big striped cat lies waiting in the tall grasses near a mangrove forest. It is dusk but the cat can see very well. It has been waiting for hours for the antelope that will come soon to feed and drink.

The herd approaches and the cat stealthily rises and begins to stalk through the grass. The antelope don't realize the danger lurking because the stripes on the cat hide it from view.

The cat gets close enough and suddenly explodes out of the grass and races toward the antelope. It will grab the slowest of the herd, kill it with its mighty jaws and teeth, and drag it to a solitary spot to feed.

The cat is the Bengal tiger. It is found in India, Nepal, Bangladesh, Myanmar, and Bhutan. It lives in tropical dry forests, flood plains, mangrove forests, tropical and sub-tropical forests, and evergreen forests.

Tigers are the largest members of the cat family and the Bengal tiger is the second largest, only smaller than the Siberian tiger. They are recognized by the orange fur with black stripes. No two tigers have the same stripe pattern. The belly is white.

The backs of the ears each have white spots called flashes. When a tiger is becoming aggressive toward another tiger, it will swivel its ears and twist them forward so the flashes show. The flashes are also visible to cubs who can then keep their mother in sight while they are learning to hunt.

Unlike other cats the tiger has round pupils in its eyes. There is a reflective membrane in the back of the eyes that reflects light back to the retina giving tigers amazing vision at night. It is what causes the glowing you see in movies and pictures of Bengal tigers at night.

The Bengal tiger has strong jaws and teeth. Most of the teeth are used for ripping meat apart and chewing. The teeth we commonly refer to as canines are the most scissors-like of all carnivores and are used in the kill. If a tiger loses one of the sharp teeth the tiger will die because it can't hunt and kill.

When the Bengal tiger hunts it grabs the prey by using the mouth. The strong jaws and sharp teeth clamp down on the neck or spine. Usually the teeth cut into the neck and the prey dies due to blood loss. Or the tiger uses its teeth and jaws to snap the spine. If the prey has tougher skin like a rhinoceros or an elephant the jaws and teeth work together to squeeze off the air supply.

The front legs of the Bengal tiger are extremely strong and can be used to hold on to the prey while the teeth and jaws do their work. The hind legs are used to propel the tiger either forward or up. The Bengal tiger walks on the balls of its pads which is why they look so graceful and menacing at the same time.

The front paws have five claws. The first claw is called a dew claw. It does not reach the ground and is smaller than the others. The hind feet have four claws. The claws are retractable and usually only appear when needed to catch and eat its food.

Bengal tigers are so strong. They routinely pull a heavy kill to the place they will eat. One was actually photographed hauling a gaur which weighed close to half a ton.

These cats like water too. They often make their kills or eat near or even in the water.

When they feed they begin with the haunches of the animal and work their way to the head. A meal can consist of anywhere from 40 to more than 80 pounds, usually closer to 40. Then they will fast for several days. Maybe they will eat a few smaller animals. Stomach and scat contents have shown some grasses and even dirt.

Contrary to popular belief, tigers do not descend from Saber-toothed tigers. They may have had a common ancestor but they are not the same type of animal.

Legend from Nagaland tells that a spirit gave birth to a human and a Bengal tiger. As they matured the human stayed at home and the tiger wandered off to live in the forest. It happens with all twin brothers in legends. They met one day in the forest and began fighting. The human tricked the tiger and killed it using a poison dart. The body of the tiger floated down the river and got hung up on some branches. One of the gods found it. Seeing that it was related to the human the god sat on the bones for years. Then they hatched into hundreds of tigers. This is the basis of many stories linking humans to tigers.

Bengal tigers are not social animals. As a rule they get together only in the late winter or spring to mate. The male might stay with the female for the better part of a month to make sure the job is done. Then he leaves to go to his own area.

A Bengal tiger marks its territory with urine and claw marks. If he comes on another tiger's territory he will use his keen sense of smell to learn about the owner. The tiger scrunches his eyes shut, curls his upper lip back, and opens his mouth to breathe in the smell of the urine. It goes into the two holes in the back of the mouth. He looks like he is disgusted but he is actually "tasting" the scent of the other tiger.

The female gives birth to 2 to 5 cubs. They are born blind. As with all mammals they rely on milk from the mother for the first part of their lives. After a couple of weeks the mother begins sharing meat with them. At about 8 months she starts letting them hunt with her. Because Bengal tigers hunt in the dark the flashes on the back of her ears are important so that the cubs can keep track of the mother.

At 18 to 20 months the cubs are ready to go off on their own. The mother is ready to mate again.

Bengal tigers are not considered as Endangered. But their numbers are dwindling. It is estimated that there are between 1400 to 5000 Bengal tigers left in the wild.

Habitat is shrinking. Even though it is illegal to kill a tiger poachers still do. And common practice is that if you find a dead Bengal tiger you can have it. Many poachers and even disgruntled farmers are resorting to poison. Then they can say they found the tiger dead.

Asian medicine believes that the powder from bones, claws, teeth, etc. is powerful. They are ground into the powder and used in medicinal mixtures. The hides are valued for the making of clothing.

So the big striped cat pulls the antelope to a place by the river. It eats its fill and stashes the rest for another meal. Hopefully no other animals will help themselves. Then it is time to rest. A Bengal tiger typically sleeps 16 to 18 hours a day. It has been a long day.