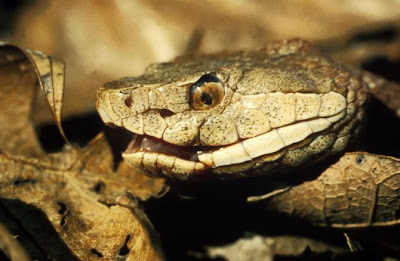 Scientists have regarded it as an evolutionary novelty. But recent studies are showing that maybe it happens a lot more often than was originally thought.

Snakes are giving birth without any help from males. That's right. Female snakes are having little snakes without fathers.

In a process called parthenogenesis females produce a cell called a polar body at the same time they produce an egg. The polar body acts like a sperm and fertilizes the egg.

The resulting DNA is not exactly the same as the mother because each cell carries different qualities of the female. That means that the offspring are not clones. The offspring is called a parthenogen.

It was thought that parthenogenesis was a way to compensate for lack of males and continue the species. Now a new study is showing that is not necessarily the case.

A team of biologists from the University of Tulsa in Oklahoma gathered pregnant female copperheads and cottonmouths from fields containing both males and females. The study group had 22 copperheads and 37 cottonmouths. They were surprised when one of each group gave birth to a parthenogen. Males were available for mating in every area they took females from.

In each case there was only one baby snake. Usually a copperhead will have between 6 and 9 little snakes and a cottonmouth can have up to 20.

Each parthenogen was a male. A female offspring of this type has not been found so far.

It is not known if the snakes born this way can reproduce because they often have abnormalities and usually die before they are ready to mate. Scientists say that this is because the snakes suffer from the most severe form of inbreeding.

Why did the females not get pregnant in the normal way? The scientists theorize that maybe they could not reproduce by mating with a male. One of them was very small and it's thought that maybe she was not suitable for a male to bother with.

These scientists plan to do yearly studies of the same groups of snakes to see if their findings will be similar.

So far the only animals that reproduce sexually but have been found to have young by parthenogenesis are Komodo Dragons, sharks, birds, and snakes. And usually these were animals in captivity and unable to find a mating partner.
Nature News Bits