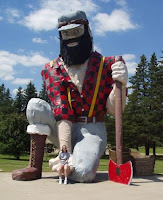 Paul Bunyan was larger than life. Whether that is simply his reputation or that he was a true giant is not clear. His reputation is definitely gigantic.The lumberjacks liked to tell stories about Paul Bunyan and with each retelling, he became bigger, better, and stronger. That ensured that the stories would be repeated and a national treasure was formed. We learned that Babe the Blue Ox was Paul's best friend, pet, and most reliable helper. Like most people he had other pets too.

Lucy was a purple cow. Like all animals that Paul Bunyan kept, Lucy was many times larger than most of her kind. Lucy was Paul's most prized milk cow. During the bitterly cold winters Lucy's milk would freeze before it hit the pail. The frozen milk was served as a special treat at mealtimes. In fact Lucy produced so much of the frozen milk that Paul invented double dip frozen ice cream dishes.

Paul got Benny from a farmer in Maine. Benny was just a calf but the farmer was having a rough time keeping him fed. When Paul got him Benny was scrawny and only weighed about two tons. Paul began to feed him flapjacks and buffalo milk. Every time Paul looked in on him he had gotten two feet taller. Benny was put in a barn to rest and get his strength built up.The next morning when Paul woke up the barn was gone. Benny had grown so much that when he got up the next morning to look for some food he carried the barn on his back. They began to call him the little blue ox.

He never reached the size of Babe but he was plenty big. Benny was a little on the lazy side but he still did more work than most of the animals. He would only pull a load in the winter so the loggers had to whitewash the roads in the summer so that Benny would think there was snow.

Benny was a glutton. Sadly that is what caused his death. He loved flapjacks and kept 200 cooks busy making them for him. One night he went into a frenzy and broke into the cookhouse. He began eating everything in sight including the red hot cook stove. It caused such indigestion and there was nothing they could do for him. There is some disagreement about what happened to Benny's remains. One logger claims that his crew bought a hindquarter and made it into corned beef. He says that some of it is still being used today. Another claim is that he was taken a safe distance from camp and buried. When the dirt was piled over the grave it formed the Black Hills in South Dakota.

Babe the Blue Ox is the one who found the next pet. As he was pulling a load of logs one day he spotted a bright yellow flash. He quickly discovered that it was a most fetching yellow cow. Babe broke free from his yoke and ran to pay a visit to this pretty gal. Paul Bunyan had to buy Bessie the Yeller Cow from the farmer who owned her because Babe refused to do any more work until he knew she would be waiting in camp at the end of the day.

Bessie the Yeller Cow had long yellow eyelashes. It is said that when she fluttered her lashes they would tickle the lumbermen working on the other side of the camp. Babe and Bessie only had one thing that they couldn't agree on. Babe thrived in the winter and Bessie loved warm sunny days. Bessie produced so much milk for making butter that Paul was able to grease the log roads making hauling so much easier for Babe that he eventually came to like summer too.

Elmer was the dog. As a pup he chased rats. As he grew he became larger than most dogs. He was a good hunter. He would hunt moose and keep the camp well supplied in meat.

Sport was a reversible dog.He was part elephant dog and part wolf. He was raised on bear milk. When he was a puppy Paul was working in the barn. Out of the corner of his eye he saw a rat and threw his axe at it. Too late he realized that it was actually Sport. Very quickly he stuck the two halves together and taped him up. Sport healed well but Paul had put one end up and the other down. When his front paws were on the ground his back paws were in the air. Sport could run for long distances because when one end got tired he simply flipped over and used the other end.

Sourdough Sam was the camp cook until there was a terrible accident. One day a vat of sourdough exploded and Sam lost an arm and a leg. Paul sent for his cousin Big Joe. Getting all the men in for meals was a problem. Big Joe had Big Ole, the blacksmith, make a huge horn. Only Big Joe and Paul Bunyan were big enough to blow it. When Paul blew it the first time it knocked down trees in a sixty mile path and caused tornadoes that created so much damage that they never used it again. The horn was junked and shipped east where it was used to make the roof for the Union Station Depot.

Paul Bunyan had a family. Mrs. Bunyan has been a mystery. Some say she was a woman of large stature that worked as a cook in Paul's lumber camps. Others say that she was a lady of leisure who lived in a city in the east and waited patiently for Paul to come home. Paul's son Jean helped him dig out Big Sur in California. The last that was heard of Jean was that he was somewhere in the south making a living by picking up lumber laden trains and moving them from one track to another.

When Paul and Babe were traveling to California Paul let his axe drag the ground behind him for a ways. The result was the Grand Canyon.

Paul used giant ants to help with moving logs because ants are known for being hard workers. I did hear that they preferred to be called "uncles" though.

When he was in Oregon Paul used large rocks to smother his campfire. This created Mount Hood.

Paul tried to harness the whales living in the Great Lakes. Their size would make them useful for pulling logs. The whales didn't like the idea at all. They left the Great Lakes which are whale free to this day.

Johnny Inkslinger was Paul's accountant. He took care of all the paperwork so that Paul could work in the forest. Paul saw how many times Johnny had to refill his inkwell so he invented a larger source for the ink. A big barrel full of ink was hooked up to Johnny's pen so he could write continuously and not have to refill.

One of the favorite foods of lumberjacks was the Whirly-Gig fish. These fish loved cheese. In the winter lumberjacks would smear a hole in the ice with cheese. The fish would come from miles away when they smelled it. At the hole the fish would begin a swirling motion and hold themselves up by fins located near their tails while they fed. They would overeat and swell Then they would pop through the hole onto the ice above where the men would gather them up. When they had enough Whirly-Gigs they would head back to camp for a good meal.

During an especially harsh winter the cook ran out of beans. He hitched up Babe the Blue Ox and they went to town for supplies. As they were crossing the river going back to camp a sudden thaw melted the ice and they all fell in the water. The cook and Babe barely escaped. Paul Bunyan was furious that the whole load of beans was in the river. He had the rest of the lumberjacks quickly put up a dam to keep the beans from escaping. Then they built fires all around the water. It boiled and cooked the beans. The bean soup was handy because men working downriver would only have to open the dam a bit and there would be plenty for them to eat.

Some "experts" say that Paul Bunyan was invented by a lumber company as an advertising stunt. But there are newspaper accounts of Paul Bunyan long before the company used him as their symbol. The experts point out that a man such as Paul Bunyan could not possibly have existed. Men who cut timber for a living might argue that point. A good many of them say they know Paul Bunyan and have worked in his camps.

It is said that Paul Bunyan now lives in the Arctic Circle and is still cutting trees down. Some say he retired to Montana where he will occasionally sigh and cause wind storms. If he sleeps or gets distracted there will be rain. Some say he has died and is buried in Minnesota. His headstone reads "Here lies Paul. That's all"