How does lightning Work? 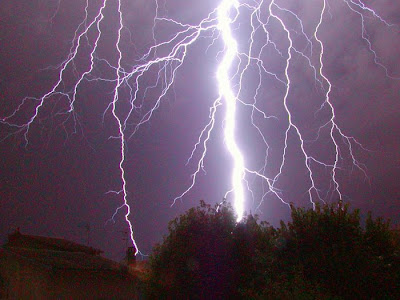 Thunder rolled and lightning flashed. A small man stood in the storm flying a kite. A key was attached to the string of the kite and the man attached silk ribbon to the string and wound it around his fingers. Benjamin Franklin wanted to prove that lightning is electricity.

Franklin had seen the research of other scientists about electricity and it made him curious. Curious enough to set up a laboratory at his home so that he could conduct experiments of his own.

While conducting his experiments Benjamin Franklin realized that lightning had many of the same properties as the electricity he was testing. But he needed to prove that they were the same. If lightning would pass through a piece of metal in the same way that electricity did he would have his proof.

Ben Franklin's experiment was actually rather foolish. If he had worked in the most active part of the storm the results could have been fatal for him. Even at the beginning of the storm when he worked it was dangerous. However he had his proof... lightning is electricity.

Lightning is caused by an unbalanced electrical charge in the atmosphere that produces a massive electrostatic discharge. The discharge can inside a cloud, from cloud to cloud, or from cloud to ground. All can create a beautiful light show but they can also be deadly.

Those big fluffy clouds we love to look at contain ice and water as well as air. The ice particles and water particles are in constant motion rubbing against each other making static electricity. This is the same elctricity you feel when you shuffle across the carpet and then touch the doorknob.

The air in our atmosphere acts as an insulator against electricity. When the electrical charge in the cloud builds to a level that overcomes the natural insulation, we see lightning.

We are most concerned with cloud to ground lightning because it causes us the most damage. It hits trees and buildings causing fires and other problems. It sometimes interrupts our man-made electrical signals and we are without the power we have come to rely on. Magnetic fields can be affected. It even strikes animals, including humans, inflicting injuries up to and including death.

Cloud to ground lightning is a complicated process. Clouds have built up an electrical charge of negative ions. The ground has positive ions that gather together due to the storm activity. As the positive ions rush up being pulled by the thunderhead, the negative ions race to meet them and we see a flash. That bolt of lightning is very hot and the air around it expands rapidly with the heat. Cooler air speeds in to fill the empty spot and this makes a loud noise that we know as thunder. You may also notice a crackling sound. That is the sound of the electrical charges moving.

In very rare cases the electrical process is reversed from negative ground to positive cloud. These positive strikes are up to 4 times stronger than the normal negative strikes.

We normally look for lightning when there is a rain storm. It also occurs during tornadoes, cyclones, hurricanes, volcanic eruptions, snowstorms, forest fires, and dust storms. Sometimes it happens when the weather is clear. Lightning strikes 40 to 50 times per second world wide. That is approximately 1.4 billion times each year.

Lightning looks quite large when we see it. Actually the normal lightning bolt is about as big arouns as an American quarter or half dollar. The reason it looks so large is that the bolt of lightning is not light.What we see is the second part of lightning... the return strike. As it returns to the cloud we are seeing electrical light.

The power of lightning is of great interest to scientists and power companies. They hope to find a way to harness that power to provide electricity more cheaply.