The Incredible Story Of Bigfoot 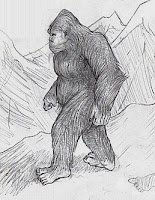 Every so often he makes the news. There will be a flurry of sightings in a lot of different places. Then all will be quiet until he resurfaces again. We always call Bigfoot "he" but there must be a "she" to keep the Bigfoot legend and their population going.

But is Bigfoot real? If he is real we have had a devil of a time finding him and his home. We need to know if he is an animal or more closely related to humans. Let's get to know the interesting character known as Bigfoot.


About the only place that Bigfoot sightings have not been reported is Antarctica.The scientific name is Gigantopithecus Blacki. but it is called hundreds of different names. In North America he is commonly called Bigfoot or Sasquatch, there are also skunk apes, Zug-wa, the ASA monster, the Cow-man, the Lizardman, the Goat-man, the Arkansas-Missouri Line wild beast, the Clanton Booger, and the Louisiana wookie, just to name a few.

Around the world you will find Yeti, the Abominable snowman, Koolakamba, the De Loys Ape, Hejkal, Yowie, Batutut, Curinqueans, Busau, Mapinguari, and Gougou, again to name just a few. It seems that each country or nationality has a Bigfoot of its own.

Depending on the area and who is describing Bigfoot, he is anywhere from 5 feet to 14 feet tall. It is said that the female is smaller than the male. The weight is between 407 pounds to 1143 pounds.

The fur covering his body is usually long and ranges in color depending on the climate. There is black, various shades of brown, reddish, and white fur. Some have been reported to have faint stripes or spots. Faces, palms, and feet are hairless. Some have been said to have bare chests and some have receding hairlines.

Bigfoot has a large square or a conical head set on a short thick neck. His brow is large and prominent.His eyes are deep set and of a dark color. They range from close together to wide set. His ears are large to nearly invisible because of fur covering them. The nose can be flat all the way up to quite bulbous. His mouth is similar to an ape's mouth. His canine teeth stick out slightly and in some cases small tusks have been reported.

Bigfoot's senses seem to be slightly sharper than a human's with a keen sense of smell and hearing. His eyesight seems to be the same as a human's in the daytime but he has an acute night vision. These may be reasons that he has been able to hide from us for so long.

The overall appearance of Bigfoot has been described as similar to a large ape or bear. He walks on two legs and has long arms that hang loosely at his side. Sometimes he is seen using his knuckles to help in balance as he walks. Often people say there is a musky odor that is like a skunk. Noises he makes are howling noises and sometimes screeches as well as snuffling noises like bears make.

The feet are what gives Bigfoot his name. Once again there are huge differences in sizes. They are anywhere from 12 to 24 inches long and 5 to 13 inches wide. The number of toes is another difference. Some have 4 toes, some 5, and some have 6.  He strides from 2 to 12 feet at a time.

Bigfoot seems to be a loner. Seldom more than one are seen at a time although there are some who say they have seen whole families together. If more than one is seen, it might be mating time.

Even though they seem to be quite docile, as with any creature you don't know, it is a good idea to maintain a safe distance if you come across a suspected Bigfoot. They are agile and surprisingly fast.  There have been some reported injuries from tangling with Bigfoot.

Bigfoot seems to get along well with bears and to a lesser extent mountain lions. It may help hide their whereabouts and also cover the remains of deceased members.

There have been Bigfoot sightings for more than 400 years. Native peoples all over the world have stories and legends about these man/apes.

The first white man to have seen evidence of Bigfoot happened in 1811 near Jasper, Alberta, Canada. David Thompson was a fur trader who found strange footprints in the snow. They were 14 inches long and eight inches wide. The foot had 4 toes.

Then there was Jacko. Jacko was captured in 1884 by a train crew in Canada. He was 4 feet seven inches tall and weighed 147 pounds. Jacko was a "gorilla type" and had long black strong hair. He was extremely strong and could break a stick simply by twisting it. Some people say that Jacko may have been a hoax based on his size and the fact that he looked so much like a chimpanzee.

In 1924 a lumberjack in Canada was captured by a Bigfoot family. He claimed the father and daughter guarded him and the mother and son prepared the meals. These creatures were vegetarians. He didn't tell anyone about his adventure until 1958 because he was afraid that people would think he was crazy.

Also in 1924 a group of miners near Mount St. Helens in Washington state in the United States saw a Bigfoot and shot and killed it. That night their cabin was surrounded by more of the creatures who threw stones, pounded on the walls, and climbed on the roof. They finally left at dawn. The miners packed up and left. The place has since been named Ape Canyon.

Another sighting in 1924 was reported by a prospector near Mount St Helens. He told a forest ranger that his cabin had been attacked by a group of Bigfoots who threw rocks and screamed like apes. He hid under his bed until morning when they left. When he went outside he saw huge footprints.

In 1958 a bulldozer operator was working in California. He came upon enormous footprints and made a plaster cast of one. It was national news and many newspapers printed a picture of the man holding the cast of the big footprint.  That was when the creature became "Bigfoot".

Years later the son of the man who made the original footprints revealed that his father had just been playing a prank. He had a friend carve 16 inch feet out of wood which the son showed reporters. He then strapped them on and walked around leaving the prints. Another worker on the crew said that the man only wanted to scare vandals and thieves who had been bothering equipment. Whatever the original reason, the man went on to make a lot of money from his Bigfoot franchise.

Perhaps the most famous of films made of Bigfoot was made by two men in 1967 in California. They claim it was a female Bigfoot walking across a clearing. It is not a clear picture but there is an animal or human in an animal suit walking. It has never been proven to be a fake although there are some "funny" things about it.

Many proofs of Bigfoot have been found and produced to show evidence that he is real. There have been pictures, movies, plaster casts, and so on. A lot of them have been explained away as normal phenomena or as outright hoaxes.

One of the most interesting things I found is that the United States government recognizes Bigfoot. The Army Corps of Engineers wrote the Washington Environmental Atlas in 1975. The atlas cost $200,000 and includes a map with pinpoints for all known sightings of Bigfoot. It contains a description of Bigfoot. It is noted that a sample of supposed Sasquatch hair was analyzed by the FBI who found that it didn't belong to any known animal. After some time a researcher said that the hairs belonged to the deer family. Apparently the analysis of these samples is now mislaid.

Because of the report Sasquatch has been stated to be an animal species. If one were to be captured it could be protected as a threatened or endangered species by the Secretary of the Interior. The emergency protection would last for 120 days until further decisions are made.

So what do you think? Bigfoot or myth? Either way it's fun to think about.