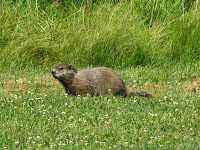 You can smell rain in the air. In the distance you hear thunder rumbling, moving closer and closer. Lightning arcs across the sky or perhaps shoots straight to the ground as you look and watch for the storm to come. The hairs on your arms and the back of your neck prickle with the change of electricity in the air. You sweat a bit at the heat and humidity in the air. Rain is coming.


The human animal has many ways to predict the weather. Aching corns and bunions, stiffening bones, frizzy hair.

We also have radar, sonar, thermometers, barometers, Doppler weather, and our reliable weathermen. These instruments and more measure natural occurrences so humans will know what the weather will be. Other animals do not have instruments to help them predict the weather. Yet they seem to know. If we watch them we can know too.

Besides living in the wild in some parts of the world, the weather loach is a popular aquarium pet. This eel-like fish is usually very calm. When a storm is approaching it will suddenly become agitated and act like it is trying to escape its surroundings.

Birds flying high in the sky are a sign of good weather. If they fly low or do not fly at all a storm is on the way. Seagulls take cover just before rain. Birds will often become noisier when a storm is coming. Others say birds become abnormally quiet before a storm. If you see large numbers of birds perching on power lines look for a storm. One belief is that if birds feed during rain the rain will last a long time. If they do not come out to feed the rain will end soon.

If you see sparrows bathing in dry mud, it is going to rain. If the rooster crows before sleeping it will rain. Chickens clustering together while scratching for food sgnify rain.

The cry of the Nialu bird and theapiha bird brings rain. If the Maina bird bathes in water rain will arrive in a couple of days while sparrows playing in water means dry weather. Black cockatoos screech loudly before rain.

The tatihari bird lays its eggs directly on soil without building a nest. If she lays the eggs on higher ground a heavy rainy season is in store. If her eggs are laid in lower ground a drought is predicted. The number of eggs also predicts the weather. One egg means one month of rain out of the four months of the planting season. Two eggs means two months of rain and four eggs show that it will rain for the four months of the season.

Owls crying unusually in the night foretells good weather for the following day. Ducks behaving erratically during good weather means that bad weather is on the way. A sign of a good day is to hear ravens croaking in the morning. Turkeys huddle together before a storm. Pigeons return home late if it is going to rain. Bats are not birds of course but if many are flying at night or they fly for longer periods of time than usual the following day will be nice. Fewer bats or seeing bats fly into the house or barn indicate bad weather coming.

Many instances of animals sensing natural disasters have been recorded. They seem to be sensitive to tornadoes, earthquakes, and tsunamis. Often family pets like dogs and cats will begin to act strangely before something like that happens. Animals heading to open ground in bunches and quickly could indicate a tornado or earthquake coming. Before the devastating tsunamis in Asia animals suddenly rushed to higher ground and away from the ocean. People who saw them and decided to follow were survivors of the huge waves because they were away from them. There were even cases of elephants breaking away from being chained to trees so they could be out of harm's way.

Snakes seem to be especially sensitive to earthquakes. They can tell if an earthquake is coming five days before it happens and from seventy five miles away. They will move out of their nests even in the cold of winter. They exhibit erratic behavior and if the earthquake is a big one they even run into walls of their nest trying to escape.

Snakes are more exposed and less hidden before a storm. It is said that hanging a snakeskin will bring rain. Frogs and toads croak louder and longer before rain. But frogs singing in the evening means fair weather the next day. Turtles seek higher ground to escape rain. Lizards are out and about when the weather is nice. When rain is coming they go into hiding. When the bearded dragon lizard sits up and lifts its head toward the sky it will rain the next day.

The wooly worm has long been used to predict the severity of winter. The wooly worm is also known as a wooly bear caterpillar. It is the larva stage of the Isabella tiger moth. They are black with a large brown band around their middles. A narrow band means a mild winter. The wider the band the more severe the winter will be. Studies have shown that the wooly bear has an eighty percent success rate in its predictions.

There are other natural indicators of a harsh winter. Included are woodpeckers sharing a tree, unusually thick corn husks, early arrival of the Snowy owl, thick hair on the nape of a cow's neck, early departure of ducks and geese, heavy and numerous fogs in August, and early migration of Monarch butterflies. You might also notice mice invading your home, crickets arriving early to the hearth, spiders entering the house in large numbers and spinning larger webs, thick tails with bright bands on raccoons, heavy tallow under a deer's tail, and squirrels gathering the more than usual abundance of acorns earlier than usual. Muskrats will burrow higher on the banks to make winter nests and hornets will build their nests higher in the trees.

Just before a rain ants will build their nests up very high on the sides. Ants tend to scatter when weather is fair and they travel in straight lines when it is going to rain. Ants building nests on top of fence posts or tree stumps means rain. Ants close their holes before rain and open them in dry weather. They will enter the house during a dry spell. Ants become more aggressive and even hostile before a drought breaks. Swarms of flying ants are seen before rain.

Termites build their mound when rain is on the way. They take to the air during favorable conditions. Swarms of them mean several hot days coming

Many people use crickets to tell the temperature. If you count the number of cricket chirps for fourteen seconds and add forty it will be the same as the air temperature within one degree Fahrenheit.

Cicadas are quiet when rain is approaching. When they are noisy rain follows and frost will be seen in six weeks. Flies, gnats, and other flying insects are very active before rain. They are also more apt to bite and the bites sting just a bit more. Expect rain when cockroaches fly. Woodlice gather in large numbers before rain. Fleas are more plentiful before rain and snow. Great numbers of fireflies appear in fair weather while they tend to fly low before rain.

Moths are seen in large numbers circling lights before rain. In scrub country active slatey beetles mean rain. A rise in the number of stink beetles indicate rain to come. When the bees fly far from the hive good weather will last. Wasps and hornets will bite eagerly when it is going to rain. A large cluster of lady bugs brings good weather. If they are looking for shelter you can look for rain.  Butterflies takes shelter before rain. An early rainy seson causes centipedes to move their eggs to higher ground.

Spiders and their webs tell a lot about the weather. Spiders weaving webs during the day indicate good weather. Webs that are wet with dew that soon dries show a nice day. Webs flying in the air mean a dry spell. Spiders are active and leave their webs before it rains. Before a storm spiders will strengthen their webs. Webs floating in an autumn sunset mean an overnight frost. Webs are built high if rain is plentiful. You will only see spiderlings floating on the wind when the winds will be light that day.

Cows and other herding animals are used for predicting the weather.  Cows, sheep, and horses all head into the wind in the winter to help keep themselves warm. Deer and elk will come down from the mountains to seek shelter before storms. Cows will lie down as the air pressure drops indicating storms. Cows and sheep will huddle together to protect themselves from bad weather. These animals turn their tails to rain.

There is a method cowboys use to tell the weather. They observe their horse's tail.

If a cat flicks its tail as if it had been electrically shocked rain is coming. Cats will lick their paws often and wash their faces from over their ears before rain. Dogs whine and cats get very frisky before a storm. Pigs will gather sticks and other nesting materials when a storm is on the way. They also squeal more.

Fish jump out of the water more often before it rains. They want to feed on the low flying insects and then hide from the storm. Dolphins seek shelter in harbors before a storm.

Now many learned people try to debunk all of these predictions of the weather. They claim that plants and animals are only reacting to changes in air pressure or temperatures. If that is the case then thermometers and barometers, etc, are in the same category... they are only reacting to changes in nature. Are there any interesting natural measurements that I have not listed? I would love to hear them.

I saved the best for last. Bear grease. Gordon Wimsatt kept bear grease in a jar. He correctly foretold weather conditions by observing changes in the bear grease. He owned a country store in lumber country. During a dry spell he cautioned the foreman of the lumber camp not to drive the lumber by truck because the trucks would get stuck in the mud caused by heavy rains. The foreman laughed and his trucks were stuck up to the axles. Wimsatt even had the nearby Air Force base postpone the launch of weather balloons against the advice of their meteorologists. Gordon was right. Bear grease is still used by some to predict the weather.