The Wren In My Jacket 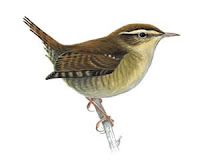 Don't Unplug Your Hub is written by John Bain. If you have visited his blog, you know that he inserts a chuckle or three into each post he writes. John had an interesting encounter with a wren's nest that he is kind enough to share with us. He even included some photos he took for us to enjoy. After you read his story, drop over to visit his blog using the link above.

The Wren In My Jacket.

The British Wren is a tiny brown bird of about 4 inches long. I always used to think it was our smallest. Indeed I am sure I was told as a child that it was our smallest, but now that place has been taken by the goldcrest. In fact the wren used to feature on our coins when I was a boy. It was on the back of our smallest coin, the farthing, which was worth a quarter of a penny. Maybe that is why I thought it was the smallest bird. 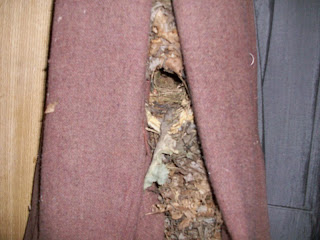 Although the wren is our most common British bird, it is rarely seen, as it spends most of its life flitting around in the undergrowth. On my little patch of land I am most likely to see it more in the winter, when the leaves are gone and the long grasses and weeds have died down.

You might not see it, but you will most certainly hear it, for its voice is remarkably loud and strong, for such a little thing. It puts all of its tiny little heart into its song, which may be the reason that it only lasts for a few seconds each time. 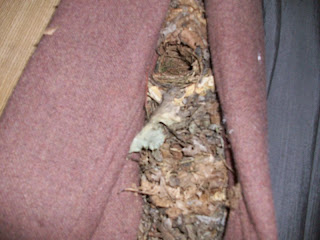 Although common the Wren suffers badly in severe cold weather, and the population plummets. In the cold weather the wrens will huddle together at night conserving body heat. I think the most Wrens ever counted together in one small nesting box, is over sixty. However the population soon recovers when the weather improves, as it is very successful in its breeding.

The male will build several nests, in all sorts of different places, and the female then makes her choice of where to lay her eggs. She then finishes off the chosen nest by lining it with feathers. Incubation is undertaken solely by the female, but both parents feed the young. 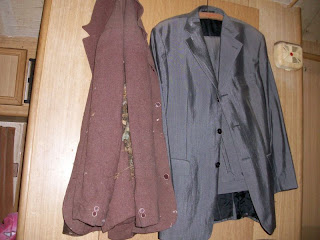 Now I know I mentioned that the male will build its nest almost anywhere, but I never expected this. The photos show my old jacket hanging in an old caravan which I use for storage. A Wren has built a nest in the folds of the jacket. How it is secured I have no idea. The caravan is closed most of the time, and the only possible access is a small gap in the floor beside the door.

I shall not disturb the nest. It would be an illegal act anyway to do so. I don't know if it is the one chosen by the female, but I believe Wrens have more than one clutch of eggs in the season. My only way of knowing will be to check if the nest is lined with feathers. If I was a female Wren I would choose this nest. It will certainly be safe from predation.

Anyway that's it. I just thought that Nature Center Magazine was a good place to tell you about it.