Saved By The Bear 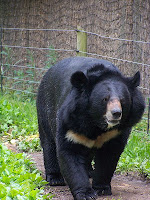 Imagine you are hiking along one of your favorite trails. You plan to hike for a while then try your hand at panning for gold. It will be a pleasant and perhaps prosperous day. This is a trail you have used many times.

Robert Biggs who lives in northern California was doing just that. It was a nice day. He spotted a mother bear with a yearling and a cub sitting beside a stream. He watched them with the wonder that is common among those who come across such a sight.


After a few moments of observation Mr. Biggs began to turn and continue his journey. Suddenly he felt something jump on his back and it knocked him to his knees.

Luckily he had his backpack on and it protected him from some of the danger. He reached to try to dislodge whatever had attacked him and was viciously clawed for his efforts.

A mountain lion had attached itself to his pack. Mr. Biggs used his rock pick to try to get the animal off. He hit the animal in the head at almost the same time that the mother bear grabbed it by the neck and tore it from the backpack.

The two animals wrestled on the ground briefly before the mountain lion decided to run away. The bear lumbered back to the stream.

Believe it or not Mr. Biggs continued on and did some panning before he returned home.  His wife was horrified at the puncture wounds from the teeth and claws on her husband's arms. He steadfastly refused to seek medical help and says that he will continue to hike that trail.

Mr. Biggs believes that the mountain lion was stalking the bear cub and he just got in the way. Either way Mama Bear is the hero of the story.
Labels: Nature News Bits