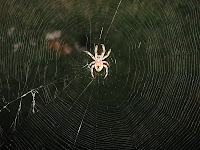 How do spiders keep from getting snared by their own webs? I have often wondered about that. After all the little insects that they eat get caught in there. But spiders seem to be able to maneuver through the complicated web design without any problems. I have heard that it is only the home web that is safe. Other spiders' webs would trap it.


I still don't know if that's true. But scientists studying spiders about 100 years ago decided that a special coating on their legs kept them from sticking. They were studying orb-weaving spiders.

Using modern imaging technology, scientists in Costa Rica have been able to study the spiders more closely. These close-up pictures allow the scientists to be able to see what is actually happening in the web.

In the early 1900's orb-weaving spiders were thought to coat their legs with an oil from their mouths. The oil supposedly kept them from sticking to the web.

An orb-weaving spider's web is an adhesive trap that insects are captured in and cannot escape. They are then harvested for food by the spider.

Recent studies showed that the spider's legs are covered with fine hair. As they tiptoe around the web the hairs allow them to make minimal contact with the web strands. But on further examination researchers watched the spiders jam their legs onto the threads with a lot of force. Still they don't stick.

Three factors were involved in keeping the spiders from sticking. The fine hairs reduce the areas of leg that would stick to the web. There is a chemical coating on the hairs that keeps the web from sticking so much. The spiders are very deliberate and delicate about the way they move their legs. For instance they are very careful to move their legs in a way that allows the sticky web to slide off more easily.

Examination under a microscope showed that if the leg came in contact with the web adhesive drops were transferred to leg hairs. They slide down the leg hairs allowing the spider to loosen itself. Then the droplets keep sliding down until they sort of drip off the ends of the hairs. It looks much like water drops sliding off a leaf.

So the scientists 100 years ago were right. And now we can prove it.