Do Alligators Live In The Sewers? 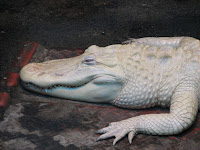 Recently I watched a program on the History television channel in which they were searching the sewers of New York City. They were looking for wildlife, specifically alligators. The program examined  the history of sightings of alligators in the sewers. Then with various officials and experts we traveled through Now York City sewers.


As we followed the experts we saw bugs and rodents flourishing underground. Foamy clumps of purported living organisms appeared periodically. Finally eyes were seen! Or were they? The show closed with a roiling mass at the end of a tunnel that seemed to be a nest... perhaps a nest of alligators.

A city the size of New York City needs a way to dispose of a great deal of waste. An elaborate sewer system was carved from beneath the city. Originally the sewers were tunnels that eventually emptied into the waters around the city and eventually into the Atlantic Ocean. Raw sewage from the streets and houses collected until it was washed away.

As people learned more about modern hygiene they realized that open sewers were a hazard. Gradually pipes and sewage treatment enclosed a lot of the materials being sent through the system. But the open tunnels are still there and being used.

Stories of animals living in the sewers have been told practically from the beginnings of the sewer systems. Rats and bugs love dark, wet places. And many people love the thrill of thinking there may be monsters in the area.

The first reports of alligators in the sewers seem to be from the 1920's. The 1930's had many sightings. In 1932 several alligators were seen swimming in the Bronx River. There was also a dead one. Some said they swam out of the sewers to enjoy the open air.

In 1935 The New York Times reported that several boys had been cleaning the snow from their street. The boy who was scooping the piles directly into the sewer saw something moving. When he realized what it was, he almost fell in the sewer himself. He screamed to the other boys that there was an alligator in there.

The boys got a rope and managed to capture the alligator and pull it from the sewer. As boys will, they poked at it a bit but got scared when it began to be aggressive and snap at them. They then beat it to death with their shovels.

Since then reports of alligators have been a regular occurrence in New York. They have been seen coming out of drains in Central Park, in the sewers, and even on the streets hiding under cars.

How did alligators come to be under the streets of New York? The theory is that vacationers from Florida would come home with a baby alligator as a souvenir. Baby alligators grow and when it was no longer a fun novelty, the alligator would be flushed into the sewer. There it would feed on the smaller animals and sewage that are so plentiful. It is supposedly quite warm from the hot water constantly emptying into the sewer and also from the pipes and wires running through.

Throughout the years various superintendents in charge of the sewers have assured New Yorkers that there are absolutely no alligators down there. One of them even cleansed the whole sewer system of those pesky alligators that weren't there.

Experts say that the climate in the sewers would not support living conditions for alligators. They say it is too cold for reptilians. What would they eat? Many think that living in the dark would cause them to become albinos.

The young man who was in the History channel program has a web page. On it he states that there never were any alligators or other signs of life in the sewers.

Snopes .com,The Straight Dope.com, Answers.com, and Urban Legends at About.com all insist that there are no alligators living in the sewers of New York. These are some of the more well-known sites for debunking urban myths.

There are books, magazine articles, and articles from newspapers as reputable as the New York Times that print articles that lead us to believe that alligators do live under new York City. They have pictures too.

Misleading pictures are shown from time to time. When a movie about alligators in the sewers was being publicized, alive-looking alligator decoys were placed around New York City. They appeared to be crawling out of the sewer.