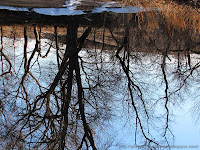 This winter has been kind of crazy in a lot of the world. In some places it snows where it shouldn't snow, and in other places there is no snow where there should be a lot of the cold white stuff. I guess this year we just have a topsy-turvy world. And to help make this weird year a little fun I found a very fun poem that will leave you smiling and happy.

If the butterfly courted the bee,
And the owl the porcupine;
If churches were built in the sea,
And three times one was nine;
If the pony rode his master,
If the buttercups ate the cows,
If the cats had the dire disaster
To be worried, sir, by the mouse;
If mamma, sir, sold the baby
To a gypsy for half a crown;
If a gentleman, sir, was a lady,--
The world would be Upside-down!
If any or all of these wonders
Should ever come about,
I should not consider them blunders,
For I should be Inside-out!

Ba-ba, black wool,
Have you any sheep?
Yes, sir, a packfull,
Creep, mouse, creep!
Four-and-twenty little maids
Hanging out the pie,
Out jump'd the honey-pot,
Guy Fawkes, Guy!
Cross latch, cross latch,
Sit and spin the fire;
When the pie was open'd,
The bird was on the brier!
Nature Poetry