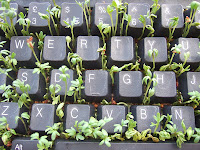 We see a lot of plants when we are out. There are trees, flowers, cactus, and weeds. Personally I like them all. They just stay in one spot and add color to the sights I see. But wait... What is that inscrutable look on the face of that one over there? Could it be up to something? Turns out that it is planning ahead. That's right. It's plotting.


Biologists at Rice University have found that even as we are looking at plants sitting there being nice to look at, they are preparing themselves for a fight. They are getting ready to defend themselves against those pesky insects.

Rice biologists went to the genetic level in plants. The biologists say at that level the plants look like a fort going on full alert.

When the biologists mixed up the plants' day and night recognition they were more vulnerable to insects than were plants that operated on a normal day-night cycle.

Day is the time most insects like to feed on the plants. That is also the time that plants produce more of a hormone called jasmonate. Jasmonate regulates production of metabolites that interfere with the insect's digestion. Other chemicals are produced to prevent infections from bacteria on the plant.

Scientists are hoping that these discoveries will help us understand how to resist insects. Maybe we can finally get a good mosquito repellant.