Did It Come First? 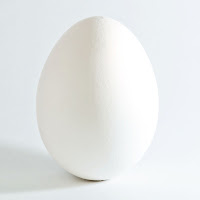 I don't know. The egg may or may not have come before the chicken. But today it's first because we're going to learn a few facts about it. It's actually quite an interesting subject.

For instance do you know how to tell if an egg is raw or boiled? Or can you tell if an egg is good or bad? Maybe you want to know why there is sometimes a green ring around the yolk of a boiled egg. Keep reading.


Eggs have been around longer than man.

Hard boiled eggs are difficult to peel for a couple of reasons. Fresh eggs fill the shell more so you might want to store them for a week or two before boiling them. They also need to be fully cooked before peeling or they will not separate from the shell.

Spin the egg. If it wobbles, it is not boiled. Boiled eggs spin smoothly like a top.

The color of the shell is determined by pigments in the outer layer. A white-lobed hen with white feathers will lay a white shelled egg. Red earlobes and brown feathers will give us a brown egg.

Eggs are about 105 degrees Fahrenheit when they are laid.

Most laying hens in the United States are single comb white leghorns.

Eggs must be marked with the date they are processed and put into cartons. January 1 would be 001 and December 31 would be 365. They are not required to mark the expiration date.

The nutritional value of white and brown eggs is the same.

It is believed that Columbus brought chickens on his second voyage to the new world. They are the ancestors of our present-day layers.

A fresh egg will sink in water. Stale ones float.

Eggs contain all the essential protein, vitamins, and minerals except for vitamin C.

The average hen lays 250 to 270 eggs per year. It takes about 25 hours. Then after the egg is laid, the hen will begin again in about 30 minutes.

The green color around a hard boiled yolk is the natural result when iron and sulfur react. This can be caused by over-cooking, cooking at too high a temperature, or even when the water has a high amount of iron.

About 75 billion eggs are produced in the United States every year.

The debate rages on. The Bible says that the chicken came first. Canadian researchers claim that because dinosaurs were laying eggs and those eggs eventually evolved into birds, the egg came first. What do you think?