On The Bonnie, Bonnie Banks 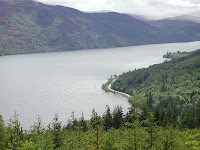 I'll bet you thought I was going to talk about the Loch Ness Monster. Not this time. Nessie is old news. I found some really exciting news. Scientists have been studying Loch Ness because of something they can actually measure. They have been measuring the rise and fall of water levels at the ends of the Loch. Sounds boring? Read on.


The reason for measuring the ebb and flow of water levels is to better understand how the Earth's crust rises and falls due to the movements of the oceans. They liken Loch Ness to a carpenter's level. It is believed that Loch Ness tilts as Scotland bends to accomodate the ocean tides.

Scientists want to study other lakes around the world to understand this phenomenon. Britain rises and falls by centimeters every 12 hours and 25 minutes. The cause of this is a great bulge of ocean water surrounding the island nation. Loch Ness is inland but close enough to the North Sea to be affected by this loading effect.

The science team placed sensors a few meters below the surface of the loch. For 201 days they monitored the changes in height of the water over the sensors.

They found a clear spike in levels twice a day. Those correspond with gravitational pulls from the sun and the moon. They also found another signal that was the result of the land in the lake tilting.

I guess if we need to know if the Earth is level all we need to do is check with Loch Ness. That is until they start studying some of the other lakes around the world.