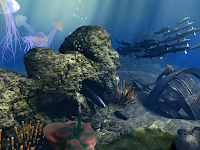 Some of this is unbelievable. But at times nature is unbelievable. Today I am presenting some of nature's unusual animals. Some live in unusual places, some live in amazing environments, and some are nurtured in different ways. You will go "Oooh", and "Aaaah", and sometimes "Ugh", but I guarantee all are interesting. Let's take a look at these critters.


Pearlfish live in the bottoms. No, not the bottoms of the ocean. They live in the bottoms of sea cucumbers. Living a long life in the coal reefs is difficult. These fish have adapted by learning to live in places they will not be seen. They find safety in the colon of the sea cucumbeer and sometimes even live in pairs there. They only go out to feed and then right back to safety. There is no harm to the host so both animals are happy. The pearlfish are also found to live in clams, starfish, and other animals with an available hole for them to hide.

Mangrove killfish live in trees and on logs. Found in the mangrove forests of the Western Atlantic, these fish can live up to 66 days out of water. They breathe through specially adapted gills and excrete waste through their skin. All they need is to keep their skin moist. One fish can actually reproduce because they are hermaphroditic. That way if a fish is stranded by itself it can still repopulate its own area.

Desert pupfish live in Death Valley. They have adapted themselves so that all they need is a tiny amount of water to live. In Death Valley temperatures can be as warm as 40 degrees Centigrade. Only the strongest can survive the hot, salty pools so they have hardy offspring.

Anglerfish live in the deepest parts of the ocean. It is hard to find a mate there so the solution for them is to have a male follow the scent of the female. When he catches her he clamps on to her with his teeth and eventually fuses with her body. He becomes a parasitic lump that is used only for sperm.

Hadal snail fish are the fish found deepest in the Japanese Trench at a depth of 4.8 miles and still alive. They use navigation receptors on their snouts to find food and to get from one place to another. Originally researchers thought any animal living at that depth would be relatively inactive because of the pressure of the water. However these little guys are busy all the time.

Jawfish are mouthbreeders. This is an unusual practice in saltwater fish. The female lays eggs that are scooped up by the male who holds them in his mouth. Naturally a big mouth is a good thing here. The male can hold up to 400 eggs at a time. He doesn't eat while his mouth is full of eggs or young. Gradually the young will emerge as they get older and eventually leave the male so he can go get a good meal.

Eelpout fish live on hypothermal vents. The extreme temperature of the vents can be up to 380 degrees Centigrade. The eelpout fish is long and thin like an eel and feeds on crustaceans that live near the vents. To travel between vents the eelfish jump from things like whale bones found on the floor of the sea.

Cichlids are tiny fish found in the Great African Lakes. They live in shells for protection.

The blobfish is known as the ugliest fish alive. Protein-filled fish living deep in the ocean have a hard time moving around so the blobfish has adapted. Instead of being filled with protein its tissue is water based. They feel similar to jelly fish. Mom and Dad Blobfish lay eggs on the ocean floor and stay to care for them together. This is not a normal behavior for a deep sea fish.

Anemonefish live in anemone. Anemone attack all fish who are unfortunate enough to come close. But anemonefish have a substance in the mucous covering of their bodies that prevents the sting of the anemone from affecting them. They lay eggs among the anemone and the male protects the young until they are old enough to be on their own.

The Brazilian blind characid is like most animals that live underground... it is blind. It also has no pigmentation. It was recently rediscovered in wells fed by underground springs. Scientists believe that these are the living relics that survived while its above ground relatives became extinct.

Baby coelacanths and eels were thought to be extinct. Only one has been seen. But scientists believe they are probably hiding in crevices and caves. Not much is known about them because there has been no evidence of mating areas or migratory practices. They think the eels might hatch in the Sargasso Sea and migrate to Europe and North America but they just don't know.

So if you have been properly amazed, I'll go now.