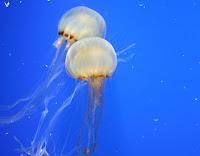 National Geographic Magazine has published their list of weirdest life forms for 2011. Some of them are strange looking, that's for sure. All of them are interesting. These are animals that were found just this year. Due to copyright considerations, I can't copy the pictures on this post. I will put a link to the National Geographic article at the end if you want a look for yourself.


A rare cyclops shark was found near Mexico. It was only a baby and the chances for it to live to adulthood are slim. Cyclopia is a congenital condition. It means that there is only one eye that is at the front center of the head. It is a functional eye.

Madagascar is where the glam rock chameleon was found. It looks like it is covered with glam rock make-up.

In Australia scientists found an albino trapdoor spider. Actually it isn't a true albino because its body is brown. But it will be called an albino until it is classified as a new species.

The Beelzebub bat is very shy. Found in the rainforest of Vietnam, it is called the demon bat because of its distinctive coloring. It will try to avoid any trouble but if captured it will fight ferociously.

Zombie ants are not the weird animal. The fungus that takes over the ant's brain is. It is actually 4 species of fungus that control the brain of the ant until it finds a habitat for releasing its spores. Then it kills the host ant and settles down to live happily ever after somewhere in Brazil.

There have been hundreds of new species discovered near the Philippines. The pancake sea slug is only one of them. It is so named because it looks like a colorful pancake.

Again in Vietnam is the Vampire Flying Frog. It uses its webbed fingers and toes to "fly" from tree to tree. The tadpoles of this frog have fangs in the form of hard black hooks protruding from the undersides of their mouths.

Deep into the Earth scientists have discovered a devil worm. So far no other animal has been found living that deep in the ground. The big excitement is that there could be other kinds of living things down there.

The big-lipped sea worm is another creature found in the deeps. This time it is deep in the ocean near the Mid-Atlantic Ridge. It is a new species of deep-sea acorn worm. It was found about 8850 feet from the surface.

The pink meanie jellyfish is found off the Florida Keys. It has hundreds of stinging tentacles that it uses to capture the moon jellyfish that it eats. Alongside the tentacles are oral arms that put out digestive juices to break down their food before they eat it.

Want to see what these guys look like? Click on this link. National Geographic Weird Life Forms