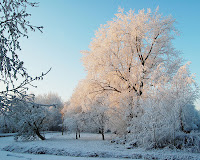 Winter has come. The weather is colder, much colder. Most of us have had the first falling of snow here in the United States. While I hate paying the heating bill and the inconvenience of trying to get from one place to the other, I do love snow. New-fallen snow gives my world a feeling of pristine peace. Occasional animal tracks remind me that I am not completely alone.


What do we know about snow? Quite a bit. Here are a few facts about the fluffy stuff.

Snow is one form of precipitation. Clouds release crystalline water ice or snowflakes in the Earth's atmosphere. Because it is made up of small ice particles, snow is granular with an open or soft structure.

I have often heard that no two snowflakes are alike. However there have been two identical snowflakes found, so there goes another theory.

Stampede Pass in Washington state has an annual average snowfall of 430 inches.

A single snowstorm can drop more than 39 million tons of snow. That is the equivalent of 120 atomic bombs.

Chionophobia is the fear of snow.

Snow is frozen water. If it too cold, water will not evaporate into the air. If there is no water in the air, water crystals cannot form. It can be too cold to snow.

Snow kills hundreds of people in the United States every year. Most deaths are because of traffic accidents, overexertion, exposure, and occasionally avalanches.

Under certain conditions a snowstorm becomes a blizzard. In a blizzard visibility is less than one quarter of a mile, the wind is at least 35 miles per hour, and these conditions must last for at least 3 hours.

Snow is colorless. Color variations can be due to light refracting through the crystals. Sometimes algae that likes cold temperatures will give a different color.

About 12 percent of the Earth's land mass is permanently covered by snow and ice.

Snowblindness is a painful condition. It is caused when unprotected eyes are exposed to the ultraviolet rays reflected from the snow and ice in bright sunlight.

In order for it to snow the tops of the clouds must be no warmer than 32 degrees Fahrenheit or 0 degrees Celcius.

An average of 105 snowstorms occur every year in the United States. A typical storm will last 2 to 5 days and snow on at least portions of several states.

The average speed of a falling snowflake is 3.1 miles per hour.

An average snowflake is made up of 180 billion molecules of water.

The largest recorded snowflake was 15 inches wide and 8 inches thick. It was found at Fort Keogh, Montana.

The largest recorded snow fall in a 24 hour period happened in Silver Lake, Colorado, in 1921. They had 76 inches of snow in that amount of time.

Japanese scientists have developed a snow-eating robot, fitted with GPS, which shovels snow from the drive and compacts it into ice bricks.

Do you now know everything about snow? I doubt it but I have certainly learned a lot. If you live in areas that get a lot of snow, I hope you bundle up and enjoy it. Go out and make snow angels with the kids.
Labels: Nature Fun Facts