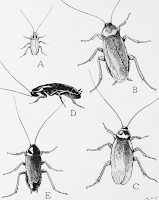 They've done it again. Scientists have been studying a new animal and it's a doozy. It doesn't really look exactly like the picture I have here but it is equally repulsive. At the same time it's fascinating too. The leaproach was recently discovered  in South Africa.

Most of the 4000 species of cockroaches move by scuttling along the ground. This one leaps like a grasshopper. How can that be, you say?
Read on.


Scientists found leaproaches hopping around in a field and thought they had a new species of grasshopper. Further investigation revealed that they are roaches with legs that operate like a grasshopper.

The hind legs of the leaproach are spring-loaded to help the insect jump above the sedge grass that is common where they are found. The interesting thing is that, ounce for ounce, the leaproach can leap farther than a grasshopper. Typically a grasshopper leaps about 20 body lengths while a leaproach jumps about 48 body lengths.

After much research it was found that these critters' knees are the reason for the ability to jump. A wad of elastic protein called resilin is at the joint. As the leaproach contracts its leg muscles the reselin coils much like a rubber band and stores the energy of the leg muscles.

When the leaproach extends its legs, it activates the "springs" on its knees. Then it leaps through the air with acceleration of 23 times Earth's gravity.

Unlike other roaches or even grasshoppers, leaproaches don't have wings to stabilize or steer where they are going. Instead it spreads its legs to help guide where it will land. Leaproaches are very accurate in landing where they want to so it must work.

It is believed that they did not develop this ability to escape predators. They are constantly leaping about to mate and to land on their favorite food... grasshopper droppings. They are full of protein.

I can hear it now. "All we need are roaches that can jump like that!" Well we have them. Hopefully they won't infest like their cousins have a tendency to do.