Your Garbage Makes Me Sick 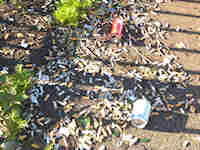 You know where I'd like to stuff all the garbage that you slobs throw all over the ground? If I told you then Ratty would come over here and censor my language like he did in my last post! The things I have to put up with! I'm sick and tired of idiots who keep their homes immaculate but then throw trash all over the streets! What's wrong with you?

First of all let me steer this ship towards nature since that's what I'm supposed to be writing about. Around here you can't go to any park or nature preserve without seeing garbage strewn all over the place. Do you not understand how to put your trash in a waste basket?

It can't be just a few people that are doing this. You go out in public slurping on a soda can. You don't see the proper receptacle around when you're finished, so instead of taking a little extra time to find one you throw it on the ground! Again, what is wrong with you?

Do you have any idea who has to pick that up? There are people who work for the parks who have to go around and check everything out every day. Part of their job is to make sure the park is clean! But that's only a small part. They need to check for injured animals and damaged property. That's just part of the routine maintenance they have to do every day. Picking up trash is a drag on their time that can ruin their whole day!

It would be different if there weren't waste baskets just about everywhere! You find them at all parks of every kind. You find them at random areas throughout your town! But some of you people are too lazy to walk a few paces to toss your trash where it belongs! I don't understand this at all! What - is - wrong - with - YOU!

That's not the worst part of it. Not too long ago there was an environmental protest around here. These morons didn't even know what they were protesting! I asked them. You know what these idiots accomplished? Nothing! The only result was a ton of garbage strewn all over the area! This was from environmentalists!

Before I go I'd just like to say that I've been very mild so far. I had to prove this way of writing works before I get taken off here. Now that I've done that I'm going to begin to really let loose.

Labels: My Own Opinion