I Hate Your Dog 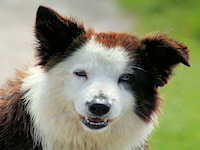 Why is your dog so darn annoying? Is it because you take your little Cujo out in public and let him off the leash only to stand there and watch as he attacks everything and everyone in sight? I don't hate all dogs. I have a dog of my own. I love my dog. I just hate your dog. You know who you are. Put your beast back on the leash!

Some of your dogs are good dogs. You keep them at home. You don't accidentally  sic 'em on unsuspecting bystanders. And if you do happen to go out with your animal you keep him on a leash and keep him away from strangers. But you others like to take your attack dog out and injure other people and then pretend you didn't know it would happen. How do you not know your crazy horror movie monster would claw and bite a person it doesn't know? And guess what. Nobody wants your mutt's snout in their crotch! "Oh, he must really like you!"

I was at a park one time and a dog came running up to me snarling and growling. The owner was nowhere in sight! I thought I was going to have to seriously hurt the animal while fighting it off. When that jerk showed up he called the attacker off just in time. Then the guy turned around without a word of apology and walked off into the woods. He should have known by looking at me that he could have been in serious trouble. He's lucky I'm a nice guy!

Most dogs that aren't on a leash aren't dangerous at all. But how am I supposed to know that? If your dog comes running up to me I usually think I need to defend myself. I am perfectly capable of hurting or killing your pet. Do you want that? I could also have your pet taken away and possibly have you arrested for assault with a deadly weapon.

But your dog is different. Little Cujo is a darling and he's too small to hurt anybody. What about the wildlife at a nature preserve? "He's so cute when he chases those nasty little squirrels!" Well those squirrels live there and they were there first! What did they ever do to you?

The worst is the guy who lets his dog defecate all over the trails  at the nature preserve. Do you want to be the one who steps in that? Look. All you have to do is use one of the baggies that are usually given out for free at any park that allows dogs! Is it that hard for you? Nobody likes it when your obnoxious mutt leaves his droppings all over where they have to walk! I really doubt any of the other animals like it either. I hate that dog but I hate that guy more!

And then there is the guy with the friendly dog. I can't count the times when somebody came over to me to ask me a question and their mutt stuck his wet nose in my crotch. I'm not like you. I don't like that! At least have the courtesy to keep him close to you when you come over. Some people think because I look official some of the time that it's okay to let their dog sniff me up and down. Usually a few words of warning takes care of that right away. Ha!

Just remember. You are the only one who loves your dog. Strangers fear it. All they see are teeth. Keep your dog at home or keep your dog on a leash. And keep that leash short when there are others around! Then I won't hate your dog. But I still won't care about him.