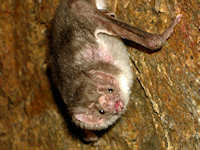 How do vampire bats know where the blood is in their prey? I've seen vampire movies where the veins of a person seem to glow and pulse with an eery red light, especially when the creature of the night is hungry. Would you be surprised to find out that it may be a similar thing for vampire bats? Let's talk a little bit about how it really happens.

There is a protein called TRPV1 that all mammals possess. This protein is a heat sensor that detects temperatures higher than 109 degrees Fahrenheit. Most mammals use this protein to detect harmful things like hot water or fire.

But vampire bats, through evolution have a modified version of this protein that enables them to detect much lower temperatures of about 86 degrees Fahrenheit. The modified version, called TRPV1-S, is found only in nerves in the face and special organs near the mouth and nose. The bat uses these to precisely detect a good, warm spot on its prey when it gets up close. These warm spots are where there are likely to be blood vessels.

Among vertebrates, only vampire bats and three types of snakes have this sense. Bats that feed on fruits, nectar or insects do not have TRPV1-S, suggesting that the special channel evolved to meet vampire bats' bloody diet.

Researchers found that some of the genetic instructions that make all of this possible in vampire bats are also present in the DNA of cows, dolphins, horses and dogs, even though these creatures do not make TRPV1-S. This says interesting things about bat evolution.

Bats were generally believed to be the cousins of rats and mice based on similarities in their body structures. But more recent studies of their genes suggest that they are in fact more related to cows and horses, and the new findings support that idea.

So does that mean that we have to beware of vampire cows in the future? Probably not. But it does give us a better scientific understanding of vampire bats.


Do you have interesting nature news to share? To learn how you can submit your news to Nature Center Magazine, go here: Submit Nature News
Labels: Nature News Bits