Eww! They Are So Slimy 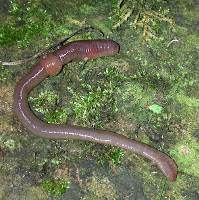 Earthworms are icky! I think most people will agree that they are not attractive and most of us do not like to touch them. What on earth are they good for? Actually, earthworms are probably the most important part of your garden. If they are that important we need to find out some more about them. Why are they slimy? What is it that they do for the garden? How big are they? Read further and I promise I won't make you touch one unless you want to.

One of the most well-known earthworms is the nightcrawler. It is not native to North America. It is believed that they were carried from Europe in potted plants. They now thrive here.

Night crawlers are usually only a few inches long, but there have been cases where they grew to around 14 inches.

There are approximately 6,000 species of earthworm in the world.

The two types of earthworm that are good for a compost pile are the European Nightcrawler and the Red Wiggler.

Earthworms are both male and female at the same time. They reproduce by joining with another worm at the clitellum and exchanging sperm packets. They then produce eggs, fertilize them, and release a cocoon of fertilized eggs. When the eggs hatch, the new worms are able to care for themselves. A few species self-fertilize.

Earthworms have no eyes, arms, legs, or teeth. They also have no bones.

The reason earthworms are slimy is because they need to keep their skin moist. If the skin dries the worm will die.

Most native North American earthworms died during the last Ice Age. That was about 10 to 15 thousand years ago.

Earthworms have sensory organs that make their skin sensitive to touch. That is why they wriggle when we pick them up. However we have no way of knowing if it hurts them or how much when they are put on a fish hook. They have no central nervous system.

Earthworms are prey for many animals. Birds, snakes, insects, moles, and even foxes are just a sampling.

Perhaps the most dangerous animal for the earthworm is the human. Pesticides sink deep into the soil and kill the worms there.

There are more than one million earthworms in one acre of land.

The largest earthworm of record was found in South Africa. It measured 22 feet long.

Earthworms can replace segments of their bodies. The ability varies greatly depending on where the segment was detached, what species of earthworm it is, and how much damage is done to the worm.

Earthworms have been kept alive for 6 to 10 years, but in the wild they usually only live for a couple of years.

The slime produced by earthworms (known as worm casting) is full of nitrogen. Nitrogen is plant food.

The bump in the middle of an earthworm is the clitellum. In times of drought some species of earthworm lose all secondary sexual characteristics, including the clitellum. Favorable conditions will bring it right back.

Earthworms do not like acidic foods such as citrus fruit and pineapples. They will leave the area where these items are.

Is this more than you ever wanted to know about earthworms? There is even more if you want to take a look at the links below.