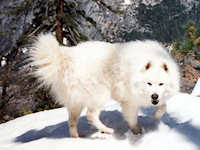 A cave in the Siberian Altai Mountains is the place.  A team of international archaeologists, led by Russian members of the group, were the treasure hunters. And what a treasure they discovered. It was a well-preserved canine skull that is about 33,000 years old. It is believed to be some of the earliest evidence ever found of a domesticated dog.


Scientists believe this specimen was probably only partially domesticated. It was discovered in Razboinichya Cave.

At that time in history, humans were hunting large amounts of animals for food and various other uses. The bones of these animals were thrown into a refuse pile. Wolves found these piles easy places to get food. The humans were happy to have the piles cleaned up, so everybody was happy. This type of interaction was the beginning of the bond between humans and dogs.

There was still a certain amount of suspicion and fear of each other so humans were not as loyal as we like to think we are now. But then neither were the wolves/dogs of that time.

During the Ice Age these early dogs died off. A possible reason is that food became scarce and neither side was willing to share. Present day dogs are descended from dogs that were around at the end of the Ice Age 14,000 to 17,000 years ago.

The picture above is a Siberian Samoyed. It is a beauty and comes from Siberia. It is an example of the modern dog. I hope they will work up a drawing of the earlier dog for comparison.

For anybody that wants more information, there are a couple of links below.