No other type of animal on Earth has inspired so many questions as the dinosaurs maybe have. They are one of the first fascinations for many children. They have inspired movies about them. And they are a great mystery to everyone. Their bones have inspired wild tales that have become legend. But what do we really know about these long dead creatures?

01. What are dinosaurs?
Dinosaur means terrible lizard. Dinosaurs are a diverse group of animals that were the dominant terrestrial vertebrates for over 160 million years.

02. When did the dinosaurs live?
Dinosaurs lived throughout the Mesozoic Era, which began 245 million years ago and lasted for 180 million years. It is sometimes called the Age of the Reptiles. The era is divided into three periods, the Triassic, the Jurassic, and the Cretaceous.

04. Did people and dinosaurs live at the same time?
No. Humans didn't appear until at least 65 million years after the dinosaurs died out. But there were some small mammals that lived at the same time as dinosaurs, including small primates.

05. What did dinosaurs eat?
Dinosaurs' diets were as varied as that of animals that exist today. Some dinosaurs ate lizards, turtles, eggs, or early mammals. Some hunted other dinosaurs or scavenged dead animals. Most, however, ate plants. Very similar to today's animals. 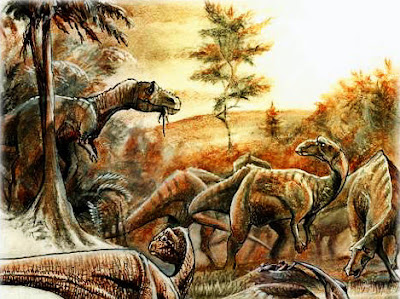 06. Why did many of the dinosaurs grow so large?
The dinosaurs' world was much different from the world today and climate and food supplies must have been favorable for reaching great size. Perhaps a large body size protected them from most predators, helped to regulate internal body temperature, or let them reach new sources of food.

07. What was the biggest dinosaur?
The largest dinosaur we know of was Brachiosaurus. It reached 23m in length and 12m in height, or about the length of two large school buses and the height of a four-story building.

10. Why did the dinosaurs go extinct?
There are many reasons why the dinosaurs died out. Some dinosaurs simply evolved into some of the animals of today. Others died out because they were hunted to extinction. Even others died because of changing environment. The unusually massive extinction at the end of the Cretaceous exterminated the last of the dinosaurs, the flying reptiles, and the large swimming reptiles, as well as many other marine animals. There is now widespread evidence that a meteorite impact was at least the partial cause for this extinction, but we are not sure about any of this.