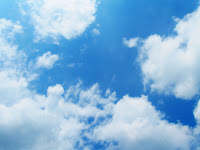 Clouds are with most of us every day. All we have to do is look up to the sky, and there they are. We see them so often that we usually take them for granted. But what are clouds? How do they form? What makes them move about and take those shapes that we love to imagine as things we know? Find out these things and more in our Ten Questions.

01. What are clouds?
Clouds are water. Either large collections of tiny droplets of water or ice crystals that are so small and light that they can float in the air. There is also some warm air and a bit of dust involved.

02. How are clouds formed?
All air contains water, but near the ground it is usually in the form of an invisible gas called water vapor. When warm air rises, it expands and cools. Cool air can't hold as much water vapor as warm air, so some of the vapor condenses onto tiny pieces of dust that are floating in the air and forms a tiny droplet around each dust particle. When billions of these droplets come together they become a visible cloud.

03. Why Are Clouds white?
Clouds are white because they reflect the light of the Sun. Their water droplets or ice crystals are large enough to scatter the light of the seven wavelengths (red, orange, yellow, green, blue, indigo, and violet), which combine to produce white light.

04. What makes clouds turn gray?
Clouds turn gray when they get thick enough or high enough so all the light above does not make it through them. They look darker because of the lack of light coming through.. Also, if there are lots of other clouds around, their shadow can add to the gray or multicolored gray appearance.

05. What makes clouds move?
Clouds move because they are pushed along by the wind. They are so light that they float along, and any breeze can push them around.

06. Why do clouds float?
Clouds float whenever they are warmer than the air around them. They are made up of mostly water surrounded by a pocket of air that is warmer than the surrounding air. Warmer rises, and colder sinks.

07. Why do some clouds look very different than others?
Clouds look so different from each other because of the elements available, including the amount of water vapor, the temperatures at their particular height, the wind, and the interplay of other air masses.

10. How do clouds form thunder and lightning?
Clouds form thunder and lightning often at the end of hot, sticky summer days. At this time, warm moist air rises quickly and forms large cumulonimbus clouds. Inside these tall dark clouds, air currents create strong updraughts and water droplets and ice particles rub against each other. As they bang together like this, it causes a build-up of static electricity. Lighter, positive charges gather at the top of the cloud and heavier, negatively-charged pieces of ice and water accumulate at the base. The ground below is also positively charged. Electricity flows between the charges and the difference between them increases. When the differences get big enough, they are neutralised and electricity is released as a flash of lightning.