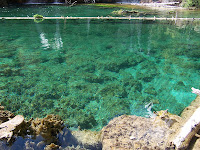 News alert! The United States Department of the Interior recently designated six new national landmarks. As part of America's Great Outdoors initiative, these are part of a program of conservation ethic in the 21st century. Under the administration of the National Park Service, they represent some of the best examples of specific features that remain in the United States.


Barfoot Park National Natural Landmark is located in the Chiricahua Mountains of southern Arizona. It supports an unusual mix of flora and fauna from the Sierra Madre and Rocky Mountains. There are 680 acres. Fifteen acres are talus slopes and there are three meadows and two permanent springs.

Morrison-Golden Fossil Areas National Natural Landmark is a 19 acre extension to Morrison Fossil Area near Golden, Colorado. This is one of the most important paleontological areas in the western United States. Internationally, they are the only sites to have unique fossil footprints representing birds, reptiles, and mammals.

Hanging Lake National Natural Landmark is near Glenwood Springs, Colorado. The lake is an outstanding example of a lake formed by limestone deposits. Hanging Lake and the waterfalls there support a rare wetlands ecosystem. There are even hanging gardens.

Kahlotus Ridgetop National Natural Landmark is near Kahlotus, Washington. It is a remnant of the Palouse Prairie which is the most endangered and most altered in the Pacific Northwest. Only about 1 percent of the original prairie remains. This landmark area is 240 acres.

Round Top Butte National Natural Landmark comes in 2 parcels that total 747 acres. It includes a basaltic butte, flat volcanic plains, and small hills. It's near Medford, Oregon. There is a mix of dry grassland, ponderosa pine, white oak, and buck brush. It is exceptional habitat because it is dominated by native bunchgrasses.

The Island National Natural Landmark is found on an isolated plateau in east/central Oregon where the Deschutes and Crooked rivers join. It also contains Lake Billy Chinook. It has one of the best known and least disturbed examples of native juniper savanna. This landmark is 208 acres.

So we have some new places to explore. They each have their own features. The picture above is of Hanging Lake. If you would like to see some pictures of each site, I have a link to an article in National Geographic that shows them all. You will find it below.