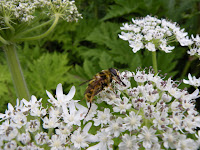 Living off the land is what we should all aspire to. Or should we? Yes, I am right. We should. But if we are going to do that, we need to have some  knowledge of what we are doing. The giant hogweed plant is a good example. We are going to learn a bit about giant hogweed. Then we can make more intelligent choices in a natural setting.


Giant hogweed is a member of the family Apiaceae. It is sometimes called giant cow parsley. Other members of the Apiaceae are common hogweed, garden Angelica, Queen Anne's Lace, and poison hemlock.

I was taught that if I needed to survive away from civilization I could eat the roots of Queen Anne's lace. They taste like carrots and have nutrients. Queen Anne's lace is so pretty too. The look of the blooms is distinctive, or so I thought.

Garden Angelica is used in many ways. It is also edible.

Poison hemlock is highly toxic. Socrates was put to death by drinking hemlock.

Giant hogweed may be the worst of all because you don't have to ingest it to have severe problems. It is on the list of 150 most noxious plants.The sap causes phytophotodermatitis. In other words, it will burn your skin causing blisters and scarring in some cases. If it comes in contact with the eyes, it can cause blindness.

This plant is extremely invasive. It is native to Central Asia. It was introduced in Europe because it is pretty. It grows and spreads very quickly and is difficult to eradicate.

In the United States giant hogweed is spreading rapidly and is found in several states. Those states are working hard to keep the plant at bay.

I will not post a list of states that have problems with giant hogweed. We should learn to be careful of all plants unless we are absolutely sure what they are. Teaching children to be careful is important in all outdoor areas.

To learn a little more about giant hogweed, there is a link below. The main thing is to know what we are dealing with when in nature.