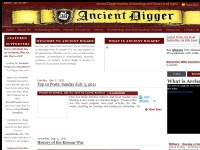 "It's good to know where you come from in order to know where you are going." This is an old Irish saying. It basically means that your ancestors are part of who you are. In the world of nature there are people who study the past. These are the archaeologists and anthropologists. They find remnants of times past, study them, and tell us where we came from.


Ancient Digger is written by Lauren Axelrod, an anthropology student who is studying for her PhD in archaeology. She believes that anyone can appreciate the significance of history and archaeology. She is also available to answer any questions you might have.

Four ancient temples were discovered near the Suez Canal at the edge of Egypt. One of them is the largest mud-brick temple discovered so far on the Sinai Peninsula. Inside is a 3,000 year old carving depicting Ramses II offering gifts to Geb, god of earth.

The Ohio Decalogue Stone is also known as the Ten Commandment Stone. In 1860 archaeologists were excavating a cairn in Ohio. They discovered a casket with a skeleton inside. When the casket was opened the skeleton disintegrated immediately from age. With the skeleton was a sealed container. When it was opened, the archaeologists found a stone. Some of the Hebrew engravings on it are of the Ten Commandments. Experts differ on exactly what the stone represents. There is an excellent video that will give a little more insight.

A crypt is a stone chamber or vault beneath the floor of a church. It is usually used as a burial chamber or a chapel. Four types of crypts are catacombs, tombs, ossuary, and mausoleum. Crypts are found all over the world. Many of them contain whole or partial mummies, skeletons, bones, and artifacts left with the dead. Lauren shows pictures of each type of crypt with an explanation of the site and what can be found there. There is even an amusing video. Unfortunately I could no longer get sound on the video after about 2/3 of the way. I found this to be a most interesting article.

Lauren reports archaeological news too. One day the news was that a fragment of reed skirt believed to be 5,900 years old was discovered in Armenia. In Lexington, Massachusetts, The Rev. John Hancock's house was moved to its original site. The 263 year house old had many historical relics that were rescued before the move. It was believed to have been the childhood home of President John Adams. The Silbury Hill is a mysterious mound. A new book deals with why it might have been built. There is a link to a good slide show. Other things in the news are: the Pyramids, the tomb of the first emperor of China, and Shakers.

The 14 Wonders of the World. I am not going to list them here. Lauren does a much better job of describing them than I can. Take a look and see if your favorite is there. Maybe you would like to see how many you can guess before you go.

Ancient Digger is full of information. There are links to other fascinating sites. Lauren has videos. The history of our wildlife and people is wrapped in the past. As we learn more about the past, we learn more about why things are the way they are now. Please visit Lauren at the link provided below. I would say look all around, but it is hard to keep from further exploring the first topic you see. When you are ready to leave, please leave a nice comment and tell her Emma sent you.