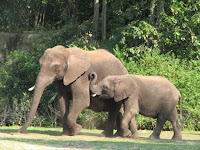 Elephants are the subject for our newest ten questions. These huge animals are usually seen by most of us at the zoo or the circus. I'll bet that when we start asking questions, we will find that there are a lot of things we do not know about elephants. For instance, what part did elephants play in the United States Civil War? Curious? Read on.


How many types of elephant are there? During the Pleistocene epoch, about 10,000 years ago, there were many different species of proboscideans. These were the mammoths, mastodons, and elephants. They ranged over most of the world. Today there are three species left. They are the African bush Elephant, the African Asian Elephant, and the Asian Elephant which is also known as the Indian Elephant.

How big are elephants? Elephants are the largest land animals.They weigh up to 13,200 pounds. The Asian Elephant is smaller than the African Elephant. They are up to 13 feet tall.

What do elephants eat? Elephants are herbivores. The eat as much as 495 pounds of food a day. It takes about 16 hours every day. During the dry season, they eat from trees and bushes. In the wet season they eat grasses closer to the ground.

What are their trunks for? The elephants trunk is a union of its nose and upper lip. It has more than 100,000 muscle units and is very sensitive. It is used as a tool to collect water for drinking and bathing. It collects dirt for a dust bath. It collects food and places it in the elephant's mouth. When an elephant drinks, it draws water into its trunk and then pours it into its mouth. The trunks are heavy and sometimes you can see elephants resting their trunks on their tusks.

What is a group of elephants called? Elephants live in a herd. Males herd together while females live in a herd with the young elephants. In the female herd an older matriarch is in charge. Sometimes if the herd is too large for the amount of resources available, she will break it into several smaller herds which will have their own matriarch.

How many babies does an elephant have? Elephants become able to reproduce at around 14 years and continue until they are around fifty. One calf at a time is the norm but rarely twins will be born.

How long do the young stay with the mother? The calf will suckle until it is weaned at the age of 4 or 5. They remain with the female herd. Males leave the herd to join a male herd at the age of 12 to 15. It is necessary for them to stay so long because they do not naturally know how to feed, drink, or care for themselves. They need to be taught all those things.

What about their ears? The Asian Elephant's ears are much smaller than the African Elephant's. They have very poor hearing despite having such large ears. Often you will see them flapping their ears. This is to cool the blood running through the ears which in turn cools the rest of the body.

Do elephants like water? Not only do they drink a lot of water to help in their digestive process, elephants like to swim. They can actually swim for long distances.

How social are elephants? Extremely. Often if a baby is unhappy, the whole herd will go to it and caress it until it is soothed. They have greeting ceremonies when a friend returns to the herd. They grieve at the death of another elephant, even stillborn calves. They cry, play, and even laugh.

There is so much about elephants that I did not know before I started this post. For instance, elephants have no natural predators other than man. Yet, there are fewer elephants all the time. I have some links below if you would like to learn a little more than ten questions can offer.

So what did elephants have do with the Civil War? The King of Siam wrote to President James Buchanan offering him elephants along with various other gifts. President Abraham Lincoln was left with the task of informing him nicely that steam power made the use of such a generous gift obsolete. A link to the letter written to the King of Siam is also below.