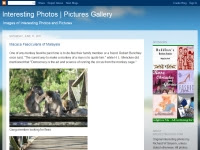 I have discovered a new site! I feel like an explorer who found treasure. Interesting Photos/ Picture Gallery began in March of this year. In it you will find exquisite pictures of a variety of nature subjects. Unless otherwise noted, the photos are original and undoctored. The only change made by the photographer, Richard W. Sinyem, is a watermark.


The Egyptian Crowfoot Grass Flower is a remarkable plant. Egyptian Crowfoot is creeping grass native to Africa. It is now found in many of the warmer climates in the world. The flowers look like prickly starfish. Most parts of the world see this grass as a weed but it is used as food during times of famine in Africa.

White Egrets are a favorite to photograph and to look at. I learned that the name egret is from the French word "aigrette". It means both "silver heron" and "brush". Among the pictures is one of this beautiful bird landing on an iron pole.

We all know that nature can be disgusting and cruel. Richard found some ants making a meal of a maggot. He points out that a maggot can also be called "disco rice".  Maybe it is because of the way it moves.

Next Richard shows us a fruit from the jungle. It looks a lot like purple grapes. It also looks like crab apples in a bunch. If anyone can identify it, Richard and I would both like to know what ti is.

Prevost's Squirrel is often called the Asian tri-colored squirrel. It is the largest of the Callosciurus species. There are several sub-species of Prevost's Squirrel and they are among the most colorful of all mammals.

Richard has some pictures that he calls floating water beads. They are actually droplets of water on spider webs. Quite artistic.

Interesting Photos/ Picture Gallery has fantastic photos. Richard adds quotes to most of the posts to keep our minds working as well. As I said, this is a new blog and deserves some encouragement. Stop by to look around using the link below. Leave a nice comment and please tell him Emma sent you.