Birding in the Falkland Islands 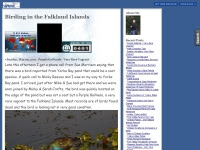 Birding in the Falkland Islands is written by Alan Henry. Alan has been living in the Falklands since 1987. He likes all natural history subjects and he enjoys photography. Because this is his home, these things make Alan the person to tell us about wildlife in his area. He is known for birds but he sneaks a few other animals in every once in a while.


A friend from South Georgia (I'm not sure where it is) stopped for a short visit while waiting for a flight to U.K. Alan received a call that a Pectoral Sandpiper was sighted near the Sidney Airport. Of course he went in search of the bird and found it. There is a picture of it trying to blend with its surroundings. Other sightings that day were Two Banded Plovers and Rufous Chested Dotterels.

A partially Albino House Sparrow was the find on this occasion. It has a lovely white head. House Sparrows are not native to The Falklands. They came with whaling ships from Uruguay in 1919. Now they can be found in various places all through the islands.

As I stated before, not all of Alan's sightings are birds. A Southern Elephant Seal that had been tagged made an appearance. The previous day, he had seen an Antarctic Fur Seal and he was trying to find it again. Instead he found the Southern Elephant Seal. The orange tag had the number plainly visible. Even more remarkable was the number tattoed on the seal. That led Alan to believe that it was part of a study at Sea Lion Islands located in the Falkland Islands.

Rumors of a Chinstrap Penguin sent Alan to a beach on Surf Bay. When they found the poor thing, they saw that it was covered with oil. Leaving it to fend for itself meant death. They and a conservation officer decided to try to catch it. There would be an attempt to clean it and feed it to let it regain its health, then return it to the wild. Falkland Conservation has been very successful in doing this.

Someone told Alan that a male Cinnamon Teal had been spotted on a pond near Mare Harbour. Alan had looked for it unsuccessfully a few times but he decided to try again. When he arrived at the pond, there were a lot of ducks. He spotted a flock of Cinnamon Teal but they flew away before he could take any pictures. He walked around the pond for about half an hour and saw a large mixed flock of ducks. Among a group of Yellow Billed Pintails he spied a Cinnamon Teal. His pictures are fabulous. You definitely need to see these beautiful ducks.

A local resident saw a strange bird at Whalebone Cove. Guess who was on his way. Alan saw a bird fly up then land in some dried kelp. It was an Eastern Kingbird. Very few have ever been seen in the Falklands. This one had droopy wings and was not in good condition. Alan shares some good photos.

Birding in the Falkland Islands is wonderfully educational as well as just plain interesting. Alan really knows his stuff. His pictures are exceptional and close enough to see detail. I hope you enjoy it as much as I do. After you have looked through his archives, please leave Alan a nice comment. Then tell him Emma sent you. The link is below.

Birding in the Falkland Islands