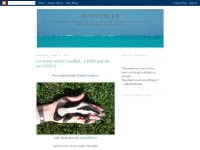 We have a mysterious blogger. Biobabbler is a biologist who prefers to remain anonymous. While there may be a mystery to the real identity of Biobabbler, I am going to go out on a limb and call our author a she. I am guessing from a picture of a hand. If I am wrong, I hope Biobabbler will correct me. Let me introduce you now to a wonderful blog.


Biobabbler lives on 5 acres in the Sierras amongst the wildlife found there. She loves nature, photography, cooking, and travel. She has a garden that has been known to supply her with tomatoes very late in the year. She has a spokesbuck named Bob and Max is the local bobcat. Being in the wild, she is constantly watching for predators who like to feed on her chickens. She chases most of them away but the bears are another matter.

Biobabbler visited an area near Los Angeles that had been devastated by fire the previous year. The aftermath of the fire is evident. But nature is strong. Plant life is returning and there are fabulous pictures as proof. As Biobabbler tells us, some plants flourish because of a fire like this. You must take a look because she thinks she may have discovered where pink elephants get their trunks.

In a video, Biobabbler shows the formation of a tornado. It does inspire awe at the fury and force. I found it interesting to watch the clouds swirling to become the funnel.

Another post is simply pictures of winter at Mt. Rainier. Winter scenes are so soothing. Perhaps frosted mushrooms are more to your taste. She has those too.

Biobabbler finally has proof that her chicken cannot read. She had suspected it for a while and now knows it to be true. She is contemplating a literacy class for her chickens.

Many people find skunks repulsive. They have probably not felt how soft a skunk's fur is. They are shiny when healthy and appealing to look at. Unfortunately there is the odor problem. Biobabbler found a picture of a baby skunk. Look how tiny it is. Then she informed us that the burrowing animals like skunks and ground squirrels perform a valuable service to other wildlife. It is interesting to read about.

Biobabbler has written a personable blog about her view of nature. She covers subjects from her garden, to places she has visited, to flora and fauna all around. I know you will enjoy it. Please look through the site, then leave her a nice comment. When you do, tell her Emma sent you. The link is below.


Do you write a nature website or blog, or know of one, that you would like to introduce to our readers? Send me the information and I might feature it in one of my next reviews. Click here to find out how: Feature My Nature Site.
Nature Site Of The Week